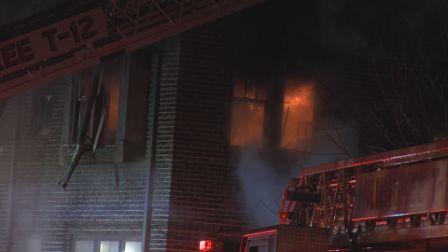 A house fire on Milwaukee's north side reached two alarms early Wednesday morning. Firefighters were called to a home near Richards and Keefe for a basement fire just after midnight, but flames quickly spread up through the first floor and into the second, forcing fire crews to take defensive actions.

Bitter cold weather also posed a challenge for fire crews. Temperatures hovered near zero degrees Fahrenheit for much of the night.  The fire was eventually brought under control around 1:30 a.m.

A representative from the American Red Cross reports 5 people were displaced. No one was injured. There is no word on what caused the fire.