MILWAUKEE (CBS 58) -- Authorities report the body of the 10-year-old child, swept away in a storm tunnel Monday near 27th and Loomis, has been recovered.

Family identified the boy as Mouhammad Arman Rashidullah. Officials say he would have turned 11 years old on July 4.

Since then, Milwaukee fire has moved to many locations along the KK River. A citizen's call is what led them to the 10-year-old's body.

Milwaukee Fire Department Chief Aaron Lipski said the persistence of first responders will lead to them finding the men.

"The challenge is the persistence of it all we’ve been able to recover, deliver this young man back so the family has some awareness. But we’re not even touching that pain right now we still haven’t located the other two reporting missing and I think that weighs heavy on everybody’s mind," Chief Lipski said.

MILWAUKEE (CBS 58) -- Dive crews found no sign of the three missing people in the tunnel search near 27th and Loomis.

They checked the three tunnels and found nothing.

Tuesday, June 14, crews picked up their operation and moved it to 31st and Kinnickinnic.

They are searching three more tunnels between 31st and Kinnickinnic and 30th and Euclid. Chief Lipski says that search started around 12:30 p.m., and they expect it to last a while.

We will continue to provide updates on CBS 58 online and on air.

MILWAUKEE (CBS 58) -- The search is continuing Tuesday morning for an 11-year-old and two men who were caught in a drainage ditch Monday.

This is the first time they've been able to search the tunnels since the three people went missing. As of last night, the tunnels were still completely filled with water from the rain, making it too dangerous to search.

"Certainly swift water moving into an enclosed space in those tunnels, provides us absolutely no opportunity to conduct some sort of rescue opportunity. I assure you those attempts would result in either fire fighter fatality or serious injury," said Chief Lipski during an update Tuesday morning.

MILWAUKEE (CBS 58) -- A dive team responded to the area near 27th and Loomis Monday, June 13, in search of an 11-year-old child and two men who authorities say were swept into a drainage tunnel.

In a press conference Monday evening, authorities said a preliminary report indicates that an 11-year-old child slipped into the drainage ditch leading into the Kinnickinnic River.

Witnesses said two adult males from Milwaukee, ages 34 and 37, entered the river in an attempt to rescue the child. Due to heavy rains from earlier in the day, all three were swept down the river.

We spoke with terrified family, praying that Milwaukee firefighters will find their loved ones alive.

It was after 6 p.m. Monday night, right after the storms blew through, that a father was outside with his young son playing ball. Family members tell us the son somehow wound up in the water and dad went in after him.

Family says another adult family member jumped in too, and so did a good Samaritan.

The fire department has said on record they are searching for three people. One woman at the scene says she could see the people in the water desperate for help and being pulled by the current.

"It was swift water," said Assistant Milwaukee Fire Chief DeWayne Smoots. "If anybody knows about rapids, the water is fast. You can't control your surroundings, makes it unsafe for anyone to venture in to do any search whatsoever because the water was moving so fast."

The water level of the creek has receded quite a bit since the storms came through earlier. It's still moving quickly, so the fire department has determined it's not safe to put a boat in the water. They're now looking through areas where the tunnels down the way lead.

The search effort has been called off for the night. Authorities say they will resume during daylight if conditions allow.

CBS 58 has a crew on scene working to learn more. 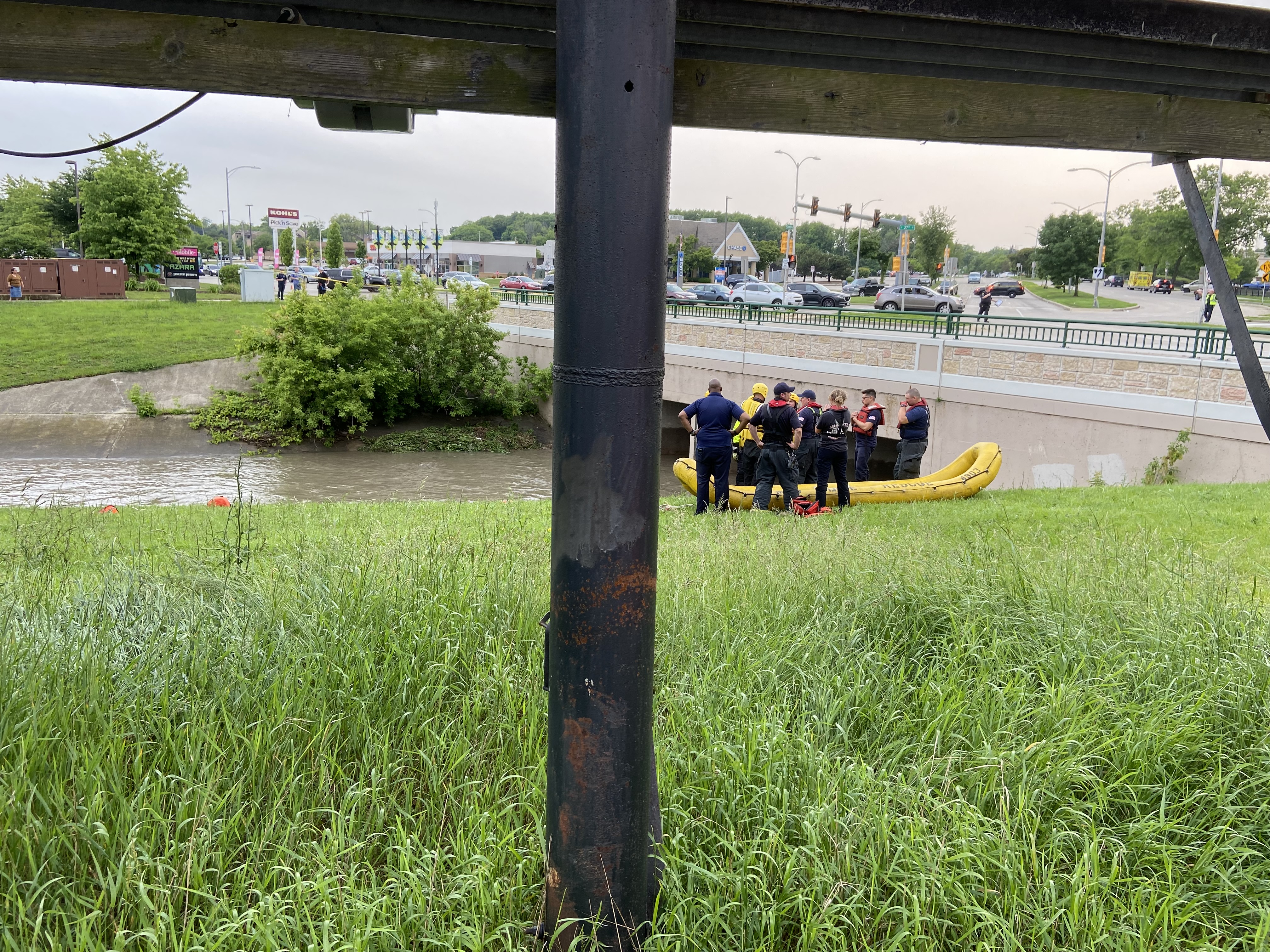 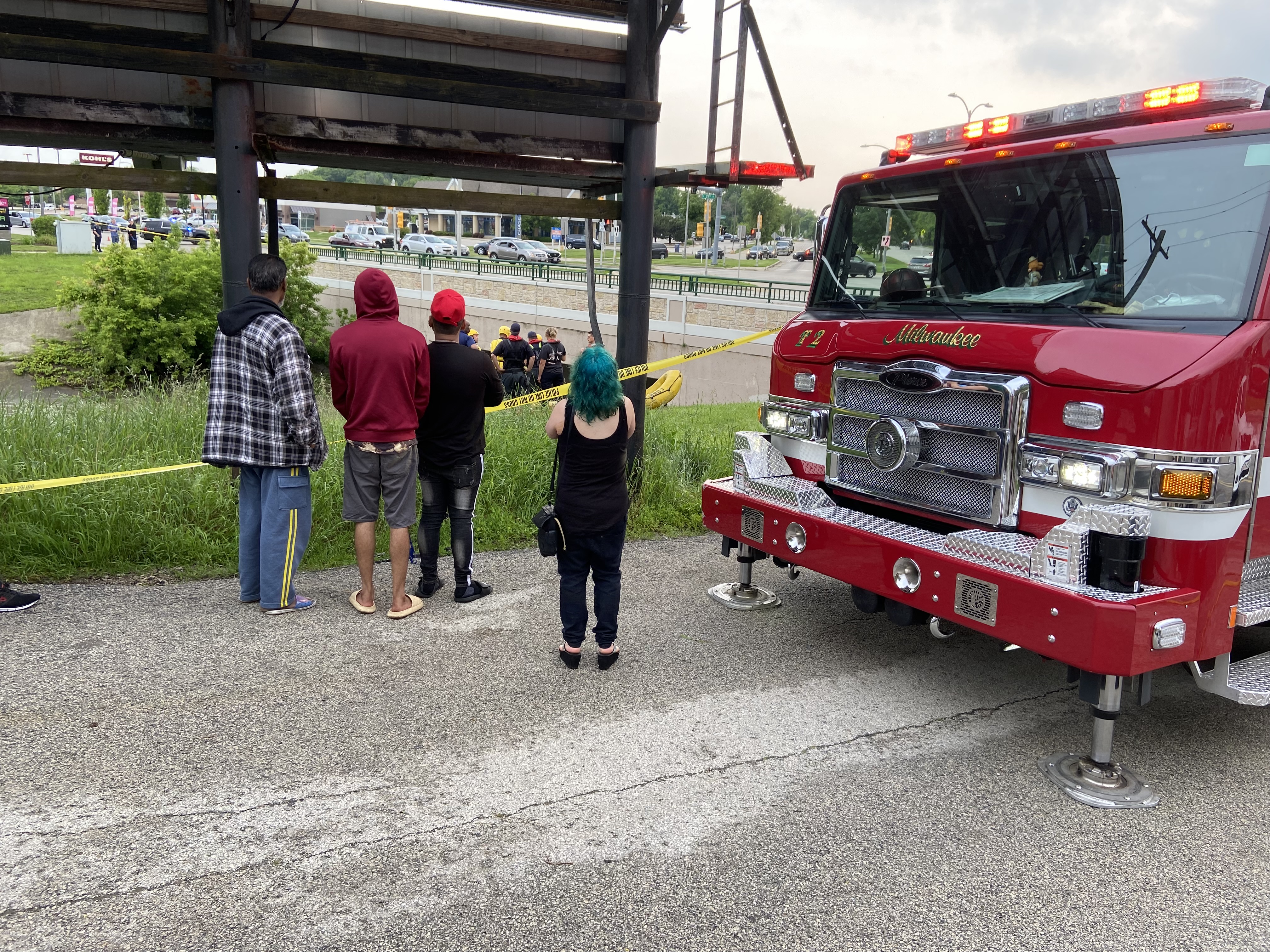