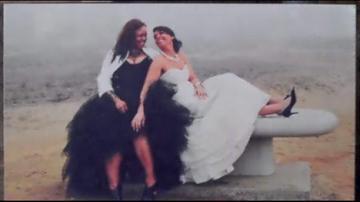 MILWAUKEE-- 8 years after Wisconsinites voted to effectively ban gay marriage, a lesbian couple from Milwaukee is taking the fight for equality straight to the State Supreme Court.

Katherine and Linda Halopka-Ivory filed a petition at the State Supreme Court against the same sex marriage ban, saying it's unconstitutional.

\"I just want the same dignity any other Wisconsin couple has,\" said Katherine, who spoke with CBS 58's Sandra Torres before heading to Madison to file the paperwork.

Katherine and Linda got married in San Diego, California last December. But they've been living in a home on Milwaukee's North side for about 2 years.

In March, Katherine went to the Register of Deeds in Milwaukee County, to ask that Linda's name be added to the property.

\"I purchased my home before I got married, so I wanted to make sure Linda would be protected if anything happened to me... just like any couple,\" said Katherine.

But once there, the clerk told her that wasn't possible unless the couple filed for a Wisconsin Domestic Partnership.

\"She wasn't considered my spouse so I don't get the waiver, I still have to do an extra form and pay all these fees and taxes only to transfer the property,\" said Katherine.

That's why Katherine and Linda decided to take a step into action adding that nothing would change until something changes with the law in Wisconsin.

\"I just want the state... a state that I honestly do love, I'm proud to be a part of... to give us the right and dignity to recognize that we do love one another and give the us the rights they give other people,\" she added.

The couple's attorney says there's no way of telling how long it will take for the Supreme Court to respond. Katherine and Linda say if they get turned down, they plan on continuing their fight.

This is the first time someone files a lawsuit against the same sex marriage ban at the Wisconsin State Supreme Court.

Another lawsuit changing Wisconsin's ban on same-sex marriage is pending in the Western District Federal Court.