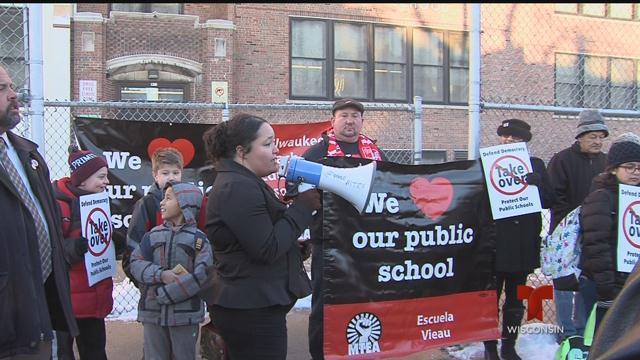 The Milwaukee County Executive is asking for a meeting of the minds when it comes to addressing low performing schools at MPS.

"We have put together a proposal that is as accommodating as supportive and has addressed as many of the issues as we've heard from MPS," Chris Abele said during a Thursday Media Conference. "We've continued to ask them are there other concerns. Can we address them? The goal has always been do this in a way to do this that is as positive and productive for MPS as possible."

As we've been reporting for months, many in the district consider it a takeover.

But Abele and a special commissioner, mandated by state law, are asking officials to get on board by June 23rd and help them come up with solutions that will allow students to succeed.

They say they've already accommodated district requests that will allow public control instead of a private operator and involve just one school instead of several.

"MPS is doing their due diligence," said Kim Schroeder who is President of the Teachers Education Association. "Going through all the different scenarios and they'll make a decision. I don't know which way they'll go. Our point is you can't take a flawed law that's unjust and help it to help public schools when it's aim is to destroy public schools."

Dr. DeMond Means who is the commissioner selected by Abele says they have not singled out any school. They are waiting for MPS.

"We started the school readiness assessment protocol that back in late April and early May," Dr. Means explained. "We've held all of this in advance until there's some kind of signal from Milwaukee Public Schools where we can partner together."

If there is no agreement, MPS could lose state funding. Abele and Dr. Means, who graduated from MPS School Riverside High, maintain they are advocates for public education.

MPS Spokesperson Tony Tagliavia issued the following statement at the request of CBS 58 for comment:

"MPS previously requested a meeting with both the county executive and the commissioner, so we were disappointed by today’s comments. We will make a decision that is in the best interests of the children of this community. This law was approved last summer and we received a proposal in late April of this year. The county executive and commissioner provided us a timeline that asked for a response by June 23 and we are following that timeline. This is an issue that will have an impact on the children of Milwaukee Public Schools now as well as the future of public education in this community. Our preference, as with any partnership, is to negotiate in a face-to-face meeting.  As we said, we have requested a meeting with the commissioner and the county executive to discuss the matter. We have yet to receive confirmation of their attendance."