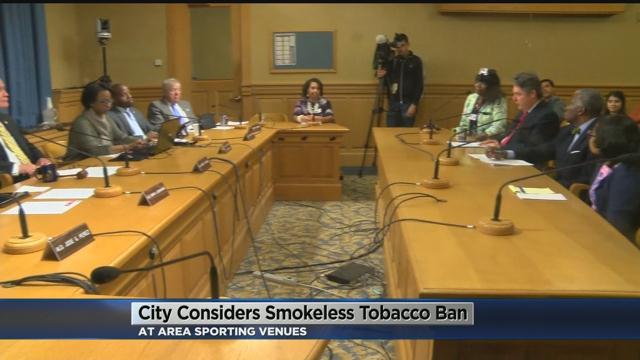 Supporters of a smokeless tobacco ban in Milwaukee said dipping and chewing is something baseball can do without.

Milwaukee's Public Safety committee took a step this morning toward knocking the past time out of the ballpark.

The measure passed with full support of the committee meaning it has a good chance of being approved by the full common council.

While the ban would also affect fans as well, the biggest impact would be on the baseball players who normally chew tobacco during games.

Supporters of the legislation say major league baseball players set an example for kids and chewing tobacco is a dangerous one.

When it comes to the legislation, Alderman Michael Murphy calls this a "self-policing policy," much like smoking cigarettes.

Violators would get a warning before they're issued a citation those citations could be between $100 and $250.

"One day he is in his room and he's got brown on his mouth and he said oh I found this at the game and now I'm all good and I'm a true baseball player,” said Crystal West, grandmother.

"Kids emulate ball players. When they see them chewing tobacco on the ball field, they use that as an example maybe that's cool and something I'd like to do," said Ald. Murphy.

The measure will be taken up by the common council on November 22nd.