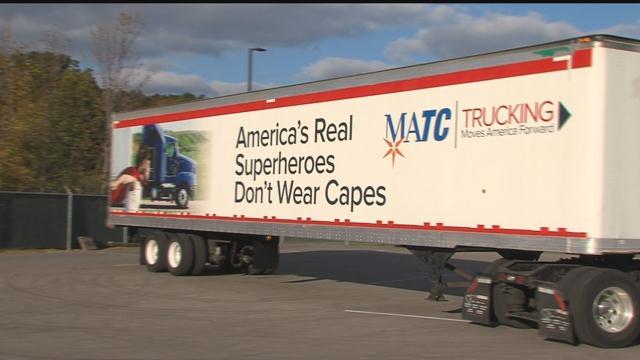 MILWAUKEE, Wis. (Oct. 9, 2015) -- Evidence that the trucking industry is suffering a huge lack of drivers. Tens of thousands are needed, and some fear that number will continue to skyrocket and hit you in the pocket book because if there aren't drivers to deliver goods and services, prices will go up. According to the American Trucking Association (ATA), an estimated 48,000 drivers will be needed on the road by the end of this year.

Instructors at Milwaukee Area Technical College (MATC) say that's partly because the baby boomers are retiring, younger people are getting pressured to take other career jobs and there's also the stereotype of the trucker that MATC is trying to change. They've partnered with the ATA to plaster the slogan "America's Real Superheroes Don't Wear Capes" on the training vehicles as a way to get people to become truckers, regardless of the stereotypes, and get that number of 48,000 job vacancies, way down.

"I would say, easily, I wanna say the next five years are gonna double that," said Dan Zdrojewski, an instructor with MATC's truck driving training program.

Zdrojewski taught Kayla Hallada, who decided to choose trucking as her profession.

"People say you gotta pay to travel. Well, in truck driving, you really don't. You're getting paid to travel," Hallada said.

She comes from a family of truckers. Her two uncles drove each for around 20 years, so she's been getting support from them. Hallada is about to graduate MATC's program, and start working.