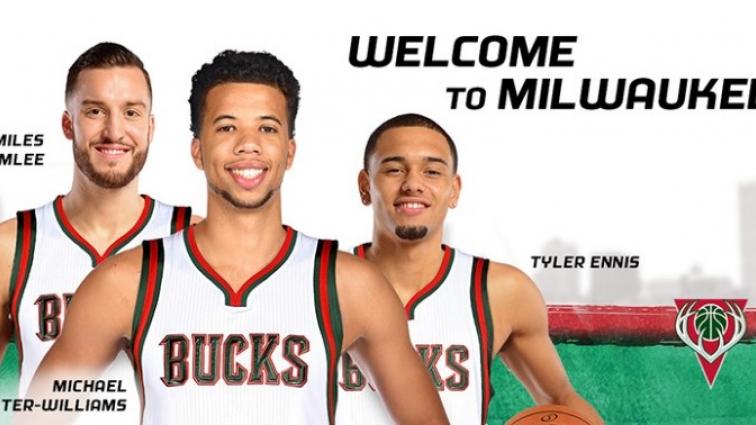 “We're thrilled to add three talented young players in Michael, Tyler and Miles to our team,” said Hammond. “Jason and his staff have an excellent track record of developing young talent, and we think this trade will accelerate our team's growth as we continue to build toward the future and our goal to put a championship-caliber team on the floor.”

The 2013-14 NBA Rookie of the Year, Carter-Williams, 23, owns career averages of 16.0 points, 6.2 rebounds, 6.7 assists and 1.7 steals in 111 career games. A Player of the Week winner after his first week in the league and a four-time Eastern Conference Rookie of the Month last season, Carter-Williams ranks eighth in the NBA this season with 7.4 assists per game. The Syracuse product has handed out 10+ assists in a game 21 times and 10+ rebounds 13 times in his young career, including 26 double-doubles and five triple-doubles. Since the start of Carter-Williams' rookie season, no player has recorded more triple-doubles in the NBA than his five.

Ennis, 20, has appeared in eight games this season as a rookie for the Suns, averaging 2.8 points and 1.8 assists in 7.3 minutes per contest. The former Syracuse guard has also appeared in nine games for the Bakersfield Jam, the NBA D-League affiliate of the Suns, and posted 18.4 points, 4.3 rebounds, 5.3 assists and 1.8 steals per contest. Ennis was selected by Phoenix with the 18th overall pick in last summer's NBA Draft.

Plumlee, 26, is in his third season in the NBA and second with the Suns. Originally selected with the 26th overall pick by Indiana in the 2012, Plumlee appeared in just 14 games for the Pacers before being dealt to Phoenix during the 2013 offseason. The Duke product emerged as Phoenix's starting center last season, starting 79 games and averaging 8.1 points and 7.8 rebounds while shooting 51.7 percent from the field. For his career, Plumlee has appeared in 148 games (107 starts) and averaged 6.0 points and 6.2 rebounds on 51.8 percent shooting.

Knight, 23, came to Milwaukee via trade on July 31, 2013. The fourth-year guard averaged 17.9 points, 3.8 rebounds and 5.1 assists in 124 games (121 starts) over two seasons with the Bucks. This year, Knight started all 52 games in which he played for Milwaukee and is averaging 17.8 points, 4.3 rebounds and 5.4 assists with a 43.5 field goal percentage, 40.9 3-point percentage and 88.1 free throw percentage. The rebounds per game and assists per game averages, along with his shooting percentages, would all be career highs.

“Both Brandon and Kendall are outstanding players and even better young men,” said Hammond. “They've both played an important role in our success this season. We wish them nothing but the best.”

Martin, 37, appeared in 11 games for the Bucks this season and averaged 1.8 points and 1.7 rebounds in 9.5 minutes per game. Martin signed his initial 10-day contract with the Bucks on Jan. 9, and was signed to a second 10-day deal on Jan. 19. He signed a contract for the remainder of the season on Jan. 29.

“We thank Kenyon for his contributions on the court and in the locker room,” said Hammond. “He's a real professional and we wish him well.”
Share this article: