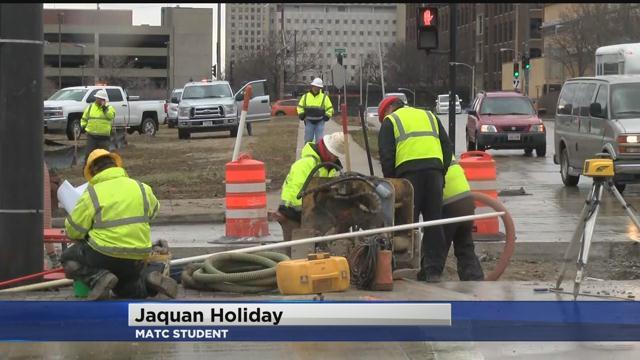 Wisconsin Department of Transportation said this sewer work happening behind me is related to the Bucks arena project.

It's part of a 3.88-million dollar sewer project expected for completion mid-June.

That's when more construction will start on a six story parking structure and a new bucks training facility in the same area.

Comparing all that with the somewhat longer timeline for the $500 million arena slated to open in august of 2018.

The team says a construction manager for the project will be named in the coming days and students at nearby MATC say already the traffic is getting rough.

Lead architects on the project have already been selected. They are using a Kansas City, Missouri based firm called Populous Architects Inc.

There has been no official groundbreaking for the new Bucks arena but Milwaukee Public Works is already tearing up the roads in preparation for its construction.

They started sewer work this week.

We've also learned the Milwaukee Admirals have signed a 10-year lease to play in the UW-Milwaukee Panther arena beginning next season.

The Wisconsin Center District, which owns the arena approved the lease during a meeting this morning.

The Admirals, who currently play in the BMO-Harris Bradley Center, made the move after learning the team was not included in the plans for a new Bucks arena.

The Admirals will invest $2 million for upgrades to the Panther Arena.