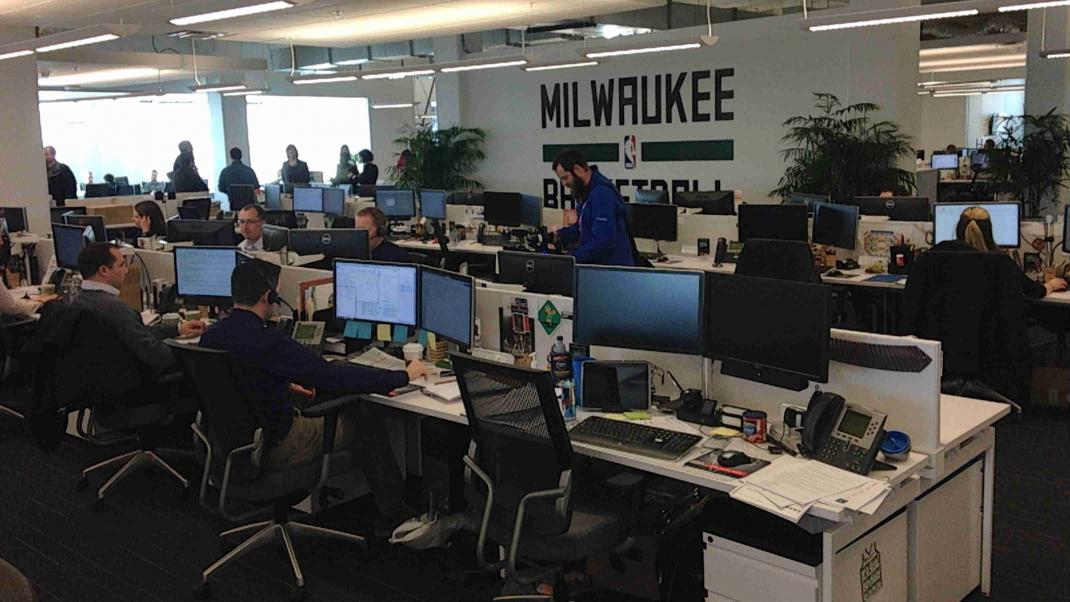 Inside the Milwaukee Bucks' new bright and welcoming offices, a plaque gives daily inspiration: 'Own the future.'

\"We were at the top of the mountain before and we will get there again,\" team VP of Operations Alex Lasry said Tuesday morning in front of a wall covered in retired Bucks jerseys.

It's a goal fittingly declared from the team's new home on the top floor of the historic Schlitz Park Stock House.  Sales, marketing and management all moved from four separate offices into the 109-year-old building February 1.

\"Top of the line, top quality and 'A class' in everything,\" Lasry said.  \"Whether it's on or off the court, trying to make sure we're the best of the best.\"

Natural light pours in to every corner of the office.  Most offices on the perimeter of the floor have floor-to-ceiling glass walls that allow exterior light in.  White noise machines and special ceilings keep noise levels low.

\"The Bucks said, 'Look, we want a forward thinking space, we want a modern space, but we don't want to forget about where we came from,'\" architect Rich Tennessen, president of Eppstein Uhen Architects said.

Employees get that reminder every time they step into the break room. A huge, 1971 championship banner -- the team's first and only title -- hangs on the wall.

\"We're not going to wait four years to put a shovel in the ground,\" Lasry said.  \"But as quickly as we can get things done is how we're moving on.\"

Lasry admits it's frustrating to not be able to announce an arena location yet, but told CBS-58 News owners Marc Lasry and Wes Edens continue to preach \"patience\" to the staff.