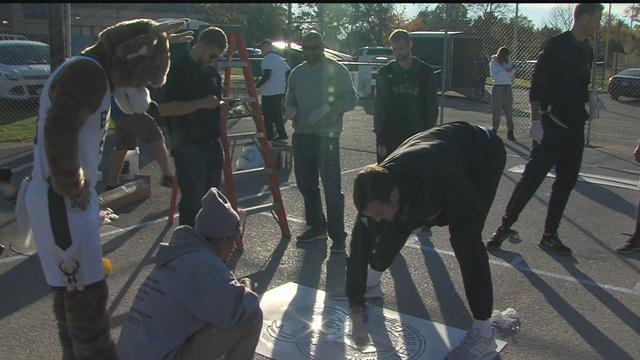 They're not just owning the future, but investing in it, with every spray, twist and loop.

"This is part of the new birth, re-birth I guess of Sherman Park," said Vincent Lyles, president and CEO of Boys and Girls Club of Greater Milwaukee.

"They're earning the trust, the respect of the kids who are gonna be their future fans, their current fans as a matter of fact," said Milwaukee Mayor Tom Barrett.

Milwaukee Bucks players got their hands dirty on Monday, fixing up the outdoor basketball court at Sherman Park. It was one of three projects throughout the city.

"We love the fact they have the great energy and enthusiasm for our kids," Lyles said.

They're kids who have big dreams for the future and now, have a nice, safe place to play like the hometown team.

"One of the Bucks hit a corner three to win the game last night, they're going to come out here and shoot their corner three," said Bucks forward Steve Novak.

Inspiration was high on the refurbished court thanks to the Rim Rockers, who put on a show, breaking in those new backboards.

Parker said it's the little things that spark change a community and he hopes young people see that too.

"I told a kid, just look at what we're doing here. We spray painted all the spots that are missing. So what does that tell you in life?" he said. "It reconnects to, you gotta finish everything you start because if someone else doesn't finish it, they you gotta help to, so that's just something he can digest and that's easy to do."

As a part of tip-off week, Bucks players will be at nine separate community events over three days.