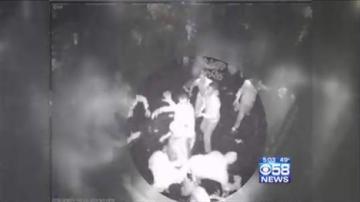 MILWAUKEE -- The Milwaukee Police Department announced Milwaukee Bucks player Larry Sanders was given citations for his involvement in a fight at Milwaukee's Apartment 720 Nightclub.

Police say Sanders was cited with disorderly conduct and assault and battery. Police plan to issue citations to others involved in this incident soon.

Earlier this month, the Milwaukee County District Attorney's Office announce they would not issue criminal charges against Sanders for this incident. The investigation could not determine how the fight started and who started it.

According to Sanders' Attorney Michael Hart, the Bucks center is getting a raw deal.

He said Sanders was getting attacked and that he only asked a group at the club not to spray him with champagne.

Sanders can be seen in the video throwing glasses, CBS 58 was told those are only plastic and being used to ward off the attackers.

Hart said it was the group who initiated confrontation with Sanders.

A 26-year-old Sussex man told police his forehead was cut when he was struck with a bottle during a fight at a Milwaukee club called Apartment 720. The Milwaukee Bucks released a statement saying, \"We are aware of an incident from Saturday evening. The matter is under investigation and Larry Sanders is cooperating fully. At this time we will have no further comment.\"
Share this article: