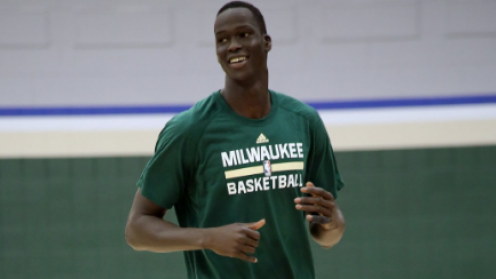 Maker, a 7-foot-1 forward/center, most recently played two seasons for the Athlete Institute Academy in Mono, Ontario, which plays in the seven-team Ontario Scholastic Basketball Association. Maker was selected League MVP, Finals MVP and First-Team All-Star following the 2015-16 season. He led the Canada Elite AAU team to the title game of the Under Armour 17-and-under league after averaging 16.5 points and 11.8 rebounds during the finals in 2015. The 19-year-old also represented the World Select Team at the 2015 Nike Hoop Summit.

Originally from South Sudan, Maker emigrated to Australia with his family when he was eight years old before moving to the United States as a teen to play high school basketball for Carlisle High School in Martinsville, Va., where he averaged 21.3 points, 13.3 rebounds and 4.2 blocks per game and was named Gatorade Virginia Boys Basketball Player of the Year in 2013-14.

Brogdon, a 6-foot-5 guard, played four years of college basketball at Virginia and averaged 13.3 points, 4.1 rebounds and 3.1 assists per game as a senior in 2015-16. He was named the 2016 ACC Player of the Year and ACC Defensive Player of the Year, becoming the first player in conference history to earn both honors in the same season. The 23-year-old was also a unanimous First Team All-American selection in 2016. He was also named to the All-ACC First Team as a junior (2015) and sophomore (2014). Brogdon concluded his Virginia career ranked ninth all-time in school history with 1,809 points scored. The Virginia product is a native of Atlanta, Ga., and played high school basketball at Greater Atlanta Christian (Norcross, Ga.).

In addition, the Bucks traded the 38th overall pick to the Golden State Warriors for cash considerations.