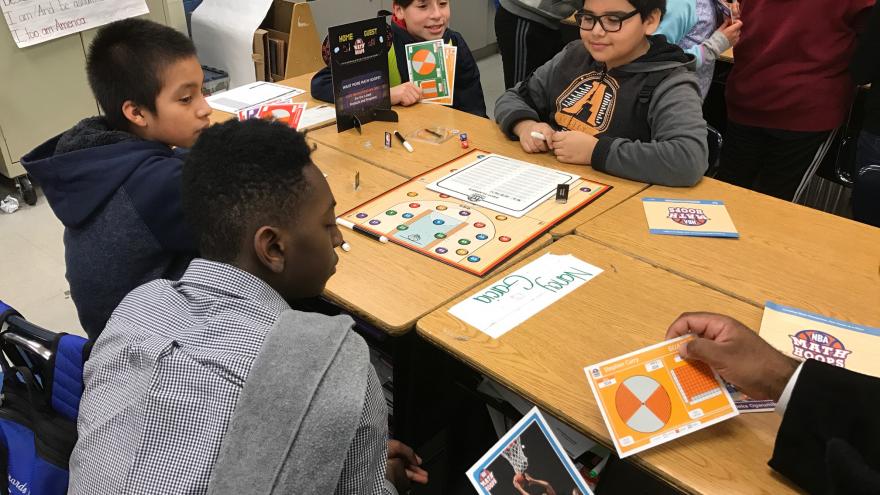 Over the past academic school year, the Milwaukee Bucks have partnered with NBA Math Hoops, a product of Learn Fresh Education Co., to bring a basketball-based educational board game to youth across the state of Wisconsin. NBA Math Hoops, currently in 13 NBA cities engaging over 20,000 youth, is a competitive board game that follows a 16-week curriculum, and is built to engage 4-8th grade students while developing fundamental math skills through the game of basketball.

The finals of this year’s Wisconsin NBA Math Hoops tournament will be hosted by the Bucks at the Milwaukee Bucks Training Center Thursday night at 5:00 PM.

“Knowing how critical math is to a student’s success, we are thrilled to support NBA Math Hoops programming throughout Wisconsin,” said Alicia Dupies, Vice President of Corporate Social Responsibility for the Bucks. “When we brought educators in as a focus group to understand if this program would help their students’ outcomes, and got a unanimous yes, we quickly mobilized to push NBA Math Hoops programming to 20 locations. Tonight’s event is a celebration of a season’s worth of learning and improvement in math.”

In its first season in Wisconsin, NBA Math Hoops was played at 20 sites across Milwaukee, Madison and Kenosha, including five locations that were sponsored by Milwaukee Area Technical College. NBA Math Hoops participants drafted teams and competed in “basketball” games by using statistics of their favorite NBA/WNBA players during weekly get-togethers. Wisconsin students solved over one million math problems in over 11,000 NBA Math Hoops competitions during the 2016-17 school year, while developing fundamental life skills. Additionally, NBA Math Hoops has helped to improve testing on fundamental math problems, as last year’s participants showed a 36.7 percent improvement in their math testing scores.

“We have been incredibly honored to implement the Math Hoops program in Wisconsin, in partnership with the Bucks,” said Nick Monzi, Math Hoops Co-Founder and COO. “From the first meeting, it was immediately apparent that the local education community in Wisconsin would be a strong partner in the work. They have strongly delivered on that promise, thanks in large part to the quality of support from the Bucks’ forward-thinking staff. Our Wisconsin Math Champs have already solved over one million math problems through the program, and are only just beginning!”

The top performers from each Wisconsin NBA Math Hoops site will meet for the inaugural Wisconsin Math Hoops tournament Thursday night at the Bucks Training Center. Over 50 participants will compete as two-person teams with the hope of winning the first-ever Wisconsin championship and earning the opportunity to advance to the national finals in Sacramento. The 2017 Learn Fresh All-Star Educator from Wisconsin, Staci Gruse of the Milwaukee Academy of Science, will be also be honored.