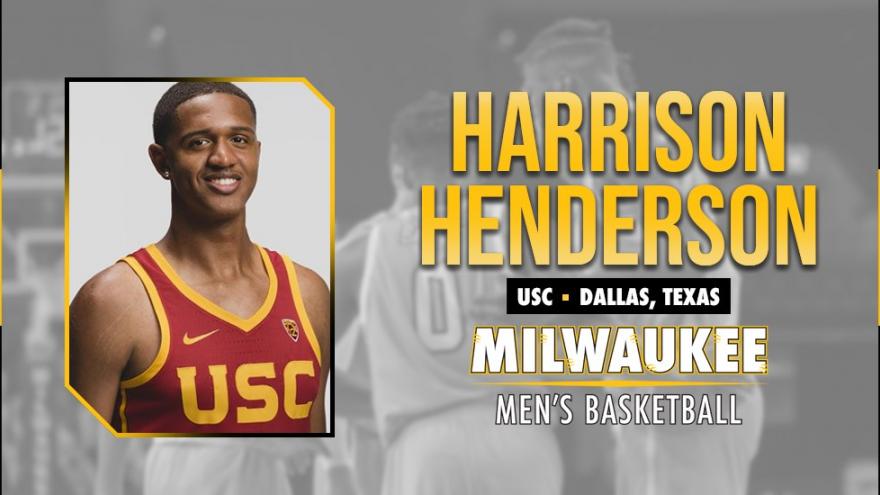 MILWAUKEE – Men's basketball head coach Pat Baldwin announced Thursday that Harrison Henderson has transferred into the program and will play his final two seasons for the Milwaukee Panthers.

"We are very excited to add Harrison to our Panther family," Baldwin said. "Harrison has the size at 6'10, the versatility and the skill-set to help us be extremely competitive in the Horizon League. He understands what it takes to play at a high level each and every night."

Henderson comes to Milwaukee following two years at the University of Southern California. The 6-foot-10 forward/center will sit out next season due to NCAA transfer regulations.

"While at USC, he competed in arguably one of the toughest conferences in the country," Baldwin said. "We fully expect him to bring the same level of intensity and competitiveness to our program."

Henderson played in 11 games a year ago, with the Trojans posting a 24-12 record while finishing the postseason in the National Invitation Tournament. As a freshmen, Henderson averaged 1.3 points and a rebound per contest as USC posted 26 victories before getting knocked out of the NCAA Tournament in the second round.

Henderson came to USC as a three-star recruit in the class of 2016. He was ranked No. 265 nationally in the 247Sports composite, 63rd among power forwards and 17th in the state of Texas. His South Grand Prairie High School team went 25-9 and reached the semifinals of the Texas 6A regional championships as a senior. He averaged 12.1 points and 6.6 rebounds and was named first team all-district. Additionally, he was an academic first-team selection and National Honor Society member.

"In addition to Harrison's ability, he comes from a great family and his character and class sets him apart," Baldwin said. "He will fit in very well with our culture of young men who have a great work ethic, who are coachable, who are great teammates and who are immensely consumed with winning."