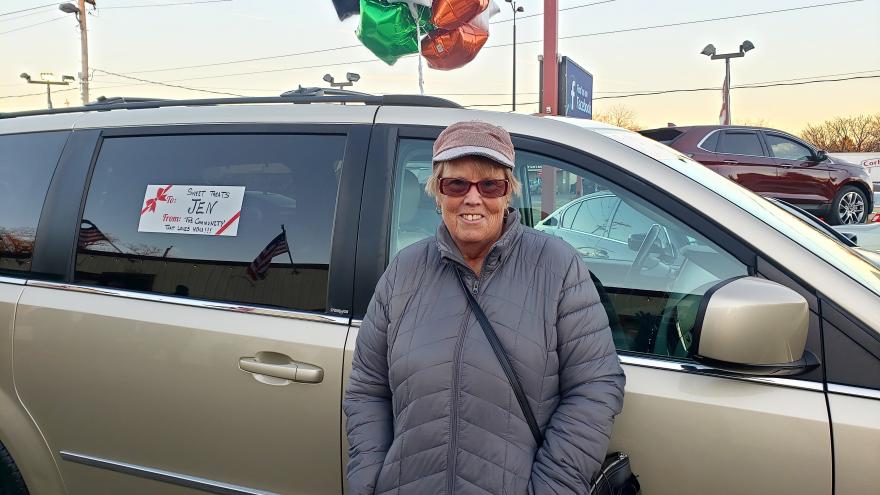 MILWAUKEE (CBS 58) -- The Milwaukee area community came together to buy a business owner a new van.

Jennifer Clark, the owner of a popular Cudhay bakery 'Jen's Sweet Treats' was surprised with a new van Saturday, at no cost to her.

"I'm just overwhelmed with the generosity with everyone that has come out to support this and support me. I just feel so blessed," Clark said.

Clark is known not only for her business but for giving back. She has donated food to families during the holidays, raised thousands of dollars for fallen police officers and honor flights, and raised money for hurricane relief across the country.

Now, Clark's community is giving back to her with a new van. Clark's previous van's engine would constantly overheat and the heat didn't work, among other problems. Her friend Jamyn Rukavina decided to start a Go Fund Me page two weeks ago and it raised more than $6K.

"Everyone in the community can say they love Jen so it's not to hard to do something nice for her," Rukavina said.

Diamond Jim's Motor Cars dealership footed the rest of the bill to get Clark a 2010 Dodge Grand Caravan with new tires.

"It's cool to see the community raise that much money pretty quickly for someone who is so selfless," Andrew Lerch with Diamond Jim's Motor Cars said.

Clark was surprised to get the van, as she's the usually on the other end of the giving.

"It's definitely not something I would have asked for myself," Clark said. "It's just strange to be on the receiving end of things, but I kind of like it," she laughed.

A van for a generous woman who will never stop helping others.

"I can't thank the community enough to make this happen," Clark said. "I will definitely hold up my end of the deal by making lots of people smile."