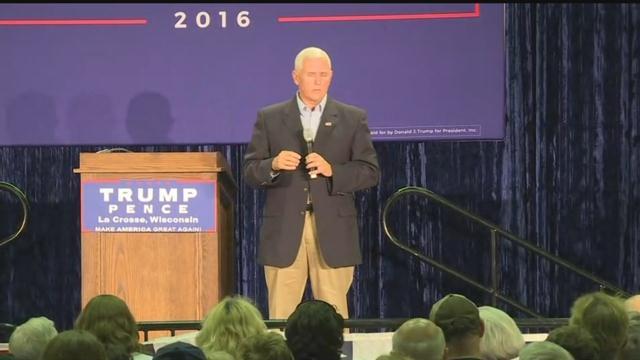 Thursday night, Republican Vice Presidential candidate, Mike Pence, spoke for about a half hour in Milwaukee.

It was Pence's fourth Wisconsin stop in the last three weeks, and his second in-state stop of the day.

He held a rally in La Crosse earlier in day.

On July 27, Pence stopped in Waukesha that was his first solo event after officially being named Trump's running mate.

Earlier Thurday, Pence said the Trump campaign is in a two on one battle against the Clinton campaign and a biased media.

"It's almost like the Green Bay Packers. They would have to play every game on the road this year. Every single game on the road in front of hostile crowds with hometown refs. but the amazing thing is.even against those odds. Donald Trump is still winning hearts and minds every day and we're going to drive all the way to Election Day and elect him as the next president of the United States,” said Pence.