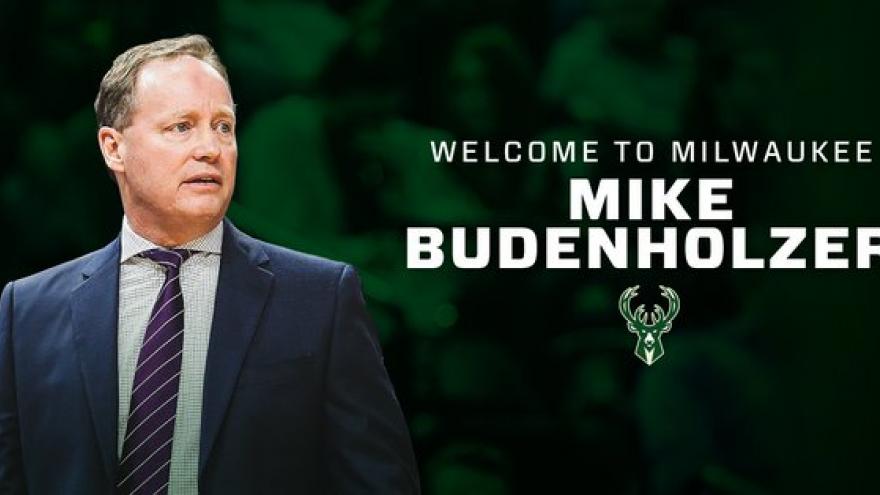 “We are thrilled to welcome Mike Budenholzer as the head coach of the Milwaukee Bucks,” said Bucks General Manager Jon Horst. “Mike has played a key role in building successful teams throughout his career. He’s widely respected and has shown a special ability to teach and develop players. His leadership, basketball intellect, championship-level experience and communication skills make him the right fit to take our team to the next level.”

“After a thorough coaching search, it was clear that Mike was the ideal choice as we enter into a new era of Bucks Basketball,” said Bucks owners Wes Edens, Marc Lasry and Jamie Dinan. “Mike has demonstrated the ability to lead and communicate and understands what it takes to build a winning culture. This move puts our organization in a terrific position as we work together toward our collective goal of sustained success and winning championships.”

Really excited to welcome Bud to the bucks family!! I think he’s exactly what this team needs and is going to make an impact right away. Bucks fans, let’s give a warm welcome to Coach Bud!! https://t.co/fDefM9m8pJ

wish him nothing but the best and can’t wait to see what he does next. He deserves to be a head coach and I hope he gets that opportunity. Thanks so much Joe!!

Budenholzer, 48, most recently served as head coach of the Atlanta Hawks where he guided the team to a 213-197 (.520) record over the last five seasons, including four playoff appearances and a franchise-best 60-22 record in 2014-15. He was named NBA Coach of the Year following the 2014-15 campaign that saw the Hawks reach the Eastern Conference Finals.

“I’m extremely grateful to the Bucks ownership group and Jon Horst to be named the next head coach of the Milwaukee Bucks,” Budenholzer said. “There are terrific people throughout the organization and together we have a tremendous opportunity to take the Bucks to the next level. I look forward to working with our group of young and exciting players and helping us evolve in many ways to succeed on the court. The venues are also in place with an incredible, new state-of-the-art arena and first-class Froedtert & the Medical College of Wisconsin Sports Science Center. The tremendously supportive fans in Milwaukee and throughout Wisconsin are waiting and ready. Now it’s up to us to put all the pieces together, and I can't wait to get started.”

Prior to joining the Hawks, Budenholzer spent the previous 19 seasons with the San Antonio Spurs, including the final 17 seasons as an assistant coach. During his time with the Spurs, he was part of one of the most successful eras in NBA history. As an assistant coach, he helped lead San Antonio to a league-best 908-438 (.675) regular season record and four NBA Championships (1999, 2003, 2005 and 2007). Budenholzer spent his first two seasons with the Spurs as a video coordinator and also served as the team’s summer league head coach on numerous occasions. He served as an advance scout for Team USA for the 2004 Olympics.

A native of Holbrook, Ariz., Budenholzer is a 1993 graduate of Pomona College where he received a bachelor’s degree in politics, philosophy, and economics and was a four-year letterman in both basketball and golf. Following college, he played professionally in Denmark for the Vejle Basketball Klub, averaging a team-high 27.5 points per game during the 1993-94 season and getting his start in coaching, serving as the head coach for two different teams in the Vejle system.