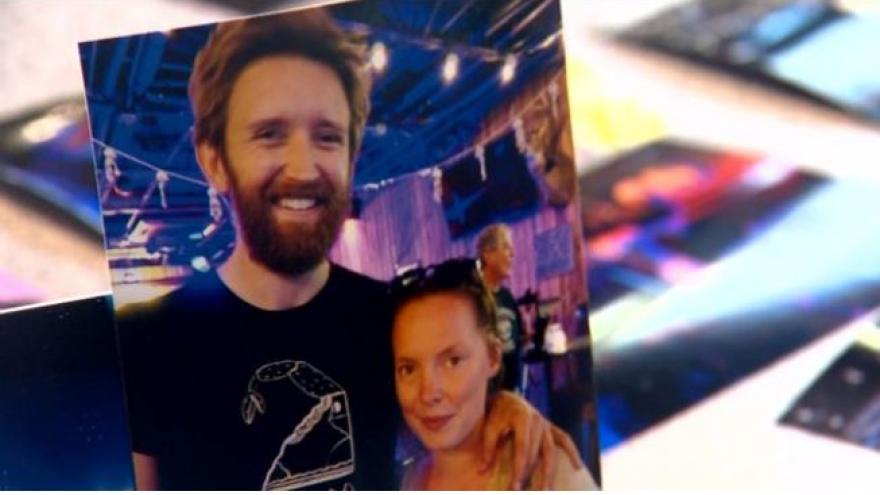 MADISON, Wis. (WISC) -- They've played shows like "The Tonight Show with Jimmy Fallon" and "Jimmy Kimmel Live!" as recently as last week, but what many people may not realize about the techno-pop duo Sylvan Esso is that their musical roots are firmly planted in Dane County.

Producer Nick Sanborn, who formed the band with vocalist Amelia Meath in 2013, is a Middleton native who attended Kromrey Middle School before graduating from Middleton High School in 2001.

Sunday night, at the 60th Annual Grammy Awards (6:30 p.m. CT Sunday on CBS 58), he and his Sylvan Esso partner-turned-wife Amelia Meath will be chasing their dreams.

“Nick and Amelia have said for a few years that one of their goals is to win a Grammy, so it's just so exciting," said Nick’s mom Linda Christen, sitting in the home where she and husband Steve Sanborn raised Nick and his younger sister.

“I mean, they have worked so hard and there are lots and lots of musicians out there and creative people who work all their lives and don't get this great chance. So it's great."

Sanborn, now 34, started his touring career with the Milwaukee-based band Decibully while at student at UW-Milwaukee, before meeting Meath at the Cactus Club in Milwaukee in 2010.

Three years later, they formed Sylvan Esso, and their second album, What Now, earned a Grammy nomination in late 2017 for Best Dance/Electronic Album.

Other nominees include the band Bonobo (Migration), Kraftwerk (3-D The Catalogue), Mura Masa (Mura Masa), and Odesza (A Moment Apart).

It’s been a long journey from grade school, where Nick played the violin and saxophone. Along the way, he learned everything from piano to guitar to accordion.

"There was a big fire of a musical sense burning in Nick at a very early age," said Nick’s dad Steve, himself a musician who Nick has credited in interviews with exposing him to music and concerts at a young age.

From there, middle and high school teachers in both music and drama in Middleton lit the fuse that sparked a musical career.

"When he was at Kromrey Middle School, there was a young band instructor who also happened to teach bass at Ward Brodt. His name was Cal Mazzara,” Christen said.

“I know he's in town somewhere but I don't know where. He said to Nick and some of his buddies, 'You should start a band,' and they went, ‘Cool let's do it!’"

After graduation from Middleton High School, Nick attended UW-Milwaukee, majoring in music composition when he was offered an opportunity to go on tour with Decibully. Steve and Linda let him spread his wings.

"I'm thinking, I really want you to finish college, but we both said we don't want him to be 40, and look back and say, ‘Hey, I wished I'd done that’,” Christen said. “Kids have to find their own voice, their own path. I can't say, ‘No I want you to be an engineer,' this is who he is."

The genre of electronic music is the perfect fit for all those instruments Nick learned back in Wisconsin.

"I think that's one thing that's really appealing to him about electronic music,” Steve Sanborn said. “There's no limitation on whether he plays the drums, or whether he has a horn section, or there's some keyboard or guitar sound. It's remarkably detailed and he's really good at it.”

Mix Sanborn’s talent with Meath’s soaring vocals and an undeniable chemistry, and you have the makings of a Grammy nomination.

Their chemistry was forged prior to their 2016 marriage, touring the country within the tight confines of a Toyota Prius.

“They schlepped back and forth across the United States in her Toyota Prius with his gear in the back, multiple, multiple times,” Christen said. “And we just thought, ‘Boy, if you two can get along with each other in a Prius, that many miles back and forth and doing the shows and doing all that stuff on your own, you must get along pretty well,' so we thought that was a good sign."

Like many other performers, they won’t be in attendance at the Grammys on Sunday night due to prior performance commitments, but they’ll be keeping a close eye on the developments while traveling from Singapore to New Zealand between performances.

Sylvan Esso will touring throughout the year, and will make a return to Milwaukee on July 21 and 22 at the Pabst Theater. The first show is already a sellout.

You get the sense that the best days for Sylvan Esso are ahead.

"I mean they have worked so hard,” Christen said. “And there are lots and lots of musicians out there and creative people who work all their lives and don't get this great chance. So it's great."