Michigan toddler dies of enterovirus D68, a pernicious strain of a spreading virus 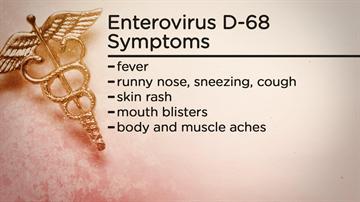 (CNN) -- A Michigan toddler has died of enterovirus D68, another reminder of the deadly potential of a disease that has infected hundreds nationwide in two months.

Madeline Reid died at Children's Hospital of Michigan, where she had been transferred \"for advanced services,\" according to the Detroit hospital's chief medical officer, Dr. Rudolph Valentini.

\"The CDC confirmed EV-D68 after her arrival here, and she subsequently succumbed to her illness,\" Valentini said.

The little girl's death spurred an outpouring of condolences online, from \"rest in peace sweet baby girl\" to \"enjoy your wings.\"

One of them read: \"Your daughter touched more lives than you'll probably ever know. May your Angel rest now.\"

Enterovirus is very common, with the Centers for Disease Control and Prevention estimating 10 million to 15 million infections each year in the United States.

But like the flu or other viruses, not all the roughly 100 enterovirus strains are the same. D68 is particularly pernicious.

Authorities say this strain has sent more children than usual to the hospital with severe respiratory illness. It seems to be most affecting children with a history of asthma or breathing problems. Yet there are exceptions, such as a 4-year-old from Hamilton Township, New Jersey, who went to bed \"asymptomatic and fine\" only to be found dead the next morning, said Jeff Plunkett, Hamilton Township health officer.

Enterovirus may also be linked to a small number of cases of a mysterious neurologic illness in Colorado, Boston and Michigan.

Doctors in Colorado spotted it first: a group of 10 children hospitalized with limb weakness, cranial nerve dysfunction and abnormalities in their spinal gray matter

Staff at Boston Children's Hospital have since identified four patients with the same symptoms. And a child in Washtenaw County, Michigan, has also developed partial paralysis in the lower limbs after being hospitalized with the virus, according to the Michigan Department of Community Health.

As of Friday, the CDC and state public health laboratories had documented 691 cases of enterovirus D68 in 46 states and the District of Columbia. Five patients who died had the virus strain, even if it's not certain all of them died because of it. Madeline's case is not yet counted in this tally.

There will be more cases, and perhaps more deaths, in the coming weeks, officials said.

Part of this has to do with a backlog on samples, with the CDC explaining \"it can take a while ... because the testing is complex and slower and can only be done by (the) CDC and a small number of state public health laboratories.\"

The virus also has not yet run its course.

As the CDC pointed out, \"Enteroviruses commonly circulate in summer and fall. We're currently in the middle of the enterovirus season.\"