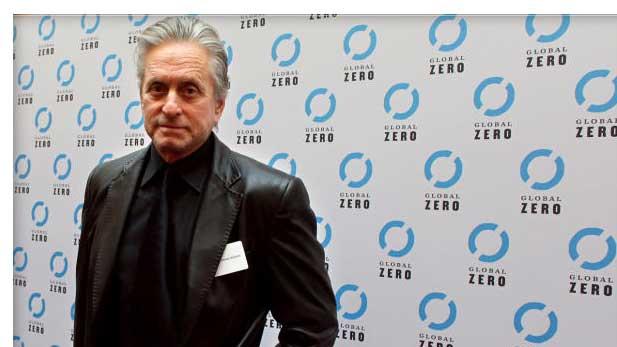 (CBS NEWS) Michael Douglas spoke highly of “Ghost and the Darkness” co-star Val Kilmer this weekend, but also made some shocking claims about his health.

During a Q&A with Jonathan Ross at the Theatre Royal Drury Lane in London, England, the 72-year-old star told the crowd that Kilmer had been diagnosed with tongue cancer -- just like Douglas had been in 2010. Douglas has been cancer-free since January 2011.

“Val was a wonderful guy who is dealing with exactly what I had, and things don’t look to good for him,” he said of his former co-star. “My prayers are with him. That’s why you haven’t heard too much from Val lately.”

A source close to Douglas told ET that while the actor did speak about Kilmer’s alleged cancer, he also “hasn’t heard from Val in a long time.”

“Hopefully he’s improved,” the source added. “I don’t think Michael’s heard from him in over a year.”

ET has reached out to an agent for Kilmer.

Kilmer has refuted reports in the past regarding his well-being. In October 2015, the 56-year-old actor denied claims that he was admitted into an intensive care unit, but rather said he was visiting the UCLA Medical Center in Los Angeles, California. “There’s a rumor that I’m unwell again and in hospital, which is untrue,” Kilmer posted on his Facebook page at the time. “I was in to verify I have no tumor or infection of any kind which was verified by the very caring experts at UCLA.”

In January 2015, Kilmer also slammed reports saying he was hospitalized for a possible tumor after reportedly bleeding from the throat. “I have not had a tumor, or a tumor operations, or any operation,” he wrote. “I had a complication where the best way to receive care was to stay under the watchful eye of the UCLA ICU. Friends have assisted who know my spiritual convictions and have been most sensitive and kind for the extra effort in making sure there’s minimum gossip and silly talk. I am praying for a speedy return to the boards as they say. God bless you all and please don’t worry.”

Last year, Douglas spoke to ET about his own health battle, and how grateful he is to be cancer-free. “I look at this generally as my third act,” he said. “I am also happy. I am cancer-free now, so you have a new appreciation.”