MFD Does Neighborhood Sweep for Smoke Alarms After Deadly Fire 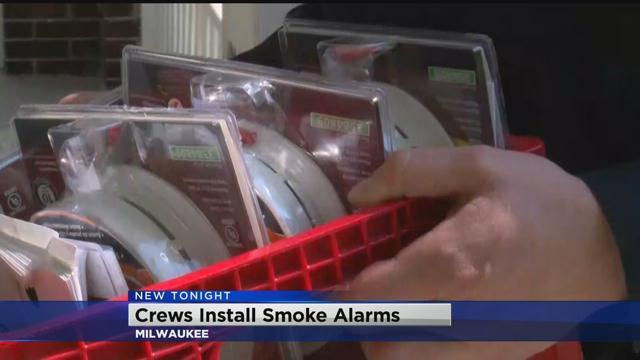 Milwaukee firefighters returned to the area near North 45th and Center Streets where 18-month-old Marshaun Franks Junior died on Thursday.

Rescuers found the toddler in the family's living room on the second floor after his home caught fire. Three other children made it out alive. There were no working smoke detectors in the home.

"We had a tragic fire on Thursday afternoon, early evening where we lost a year and a half year old boy," said Lt. Bill Paulen with the Milwaukee Fire Department.

"This afternoon Milwaukee firefighters will be conducting a neighborhood sweep... firefighters out creating urban safety and going through that neighborhood and checking to make sure that all the people that are home have a working smoke alarm in their house.

All smoke detectors were installed for free. The no cost alarms are part of a program the Milwaukee Fire Department has been conducting since 1992.

In addition to a working smoke detector, firefighters urge families to have an escape plan and a meeting place. Firefighters also warn citizens not to break windows when escaping a fire. It can let more oxygen inside to fuel the fire.

If you do not have a working smoke alarm in your home, you can have one installed for free. Call the City of Milwaukee Smoke Detector Hotline at 414-286-8980.