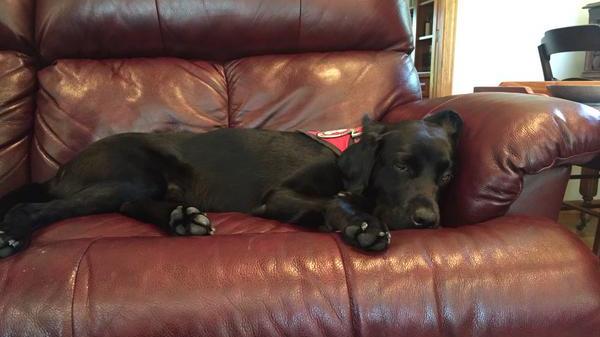 Saturday, a Mequon man was given the gift of hearing, through a dog. CBS 58 was there as service dog \"Nina\" got her final certification.

For the past four months, Nina has been training one on one with her new owners, adding \"lifesaver\" to the list of skills she's already been trained in.

\"She's a wonderful family member, we love having her, she goes everywhere with me,\" said owner Paul Chavez.

On the outside, Nina looks like your typical black lab, but to her new dad, Paul  Chavez, she's so much more.

\"They're every day sounds. Phone calls, alarm clocks kitchen timers that I can't hear and Nina will tell me when she hears those sounds are happening and what I need to pay attention to,\" said Chavez.

Paul lost most of his hearing after an ear infection back in 2002.

\"On the plane flight home I got an inner ear concussion and it resulted in some nerve damage that was a significant hearing loss in my right ear and a little in my left ear,\" he said.

So, Nina has spent the last two years in Minnesota at \"Can-Do Canines,\" being trained to be the ears for her new dad.

\"Dogs stay with trainers for a year and a half and that's when they learn the basics: Obedience, socialization and general house manners,\" said Kaity McGinn with the organization.

Alerting him to important  everyday sounds like an alarm
\"All of those sounds her reaction is to nudge me, to touch me to tell me that there's something going on and then lead me to the source of the sound,\" said Chavez.

But also those that could save his life.
\"The sounds she knows best right now are the smoke alarm, the kitchen timer, alarm clock, telephone ring, the doorbell,\" he said.

And with Nina passing her certification, \"Can-Do Canines\" couldn't be happier about helping save another life.

\"Its the things that we take for granted; its amazing how the dog can change their life,\" said McGinn.

Chavez tells us this was a combined training effort because for every hour Nina spent learning new sounds, Chavez and his fiance spent time learning how to manage a service dog out in public.