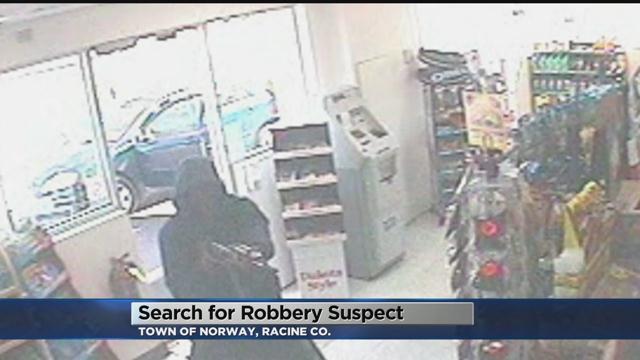 Victims in a string of armed robberies across three counties are saying that one suspect is behind it all.

The crimes have happened over the past two weeks at gas stations in New Berlin, Mequon, and the Town of Norway in Racine County.

Although authorities have not confirmed that the suspect in all of these armed robberies is the same person - the people targeted in these crimes say the description and photographs collected during these investigations suggest to them that one man is on on a dangerous crime spree.

The latest target was the BP Gas Station on Loomis Road. Just after 4:30 p.m. on Monday a surveillance camera captured images of the man wearing a hooded sweatshirt, pointing a large rifle.

The suspect has a striking resemblance to a suspect in another set of photos. Those were taken at the Mobil Gas Station near the intersection of Mequon Road and North Port Washington Road. A similar armed robbery happened at that location on September 20.

When CBS 58 News showed pictures from both crimes in a side-by-side comparison to management there - they said based on the clothing, gun, and blue Toyota, they feel it's definitely the same suspect.

In New Berlin at a Mobil Gas Station on Cleveland avenue employees shared the same feeling. They don't have pictures to share but the description of a suspect from their robbery on September 18 matches the pictures.

The suspect is still on the run. Authorities say they are coordinating their efforts with other agencies as their investigations continue.