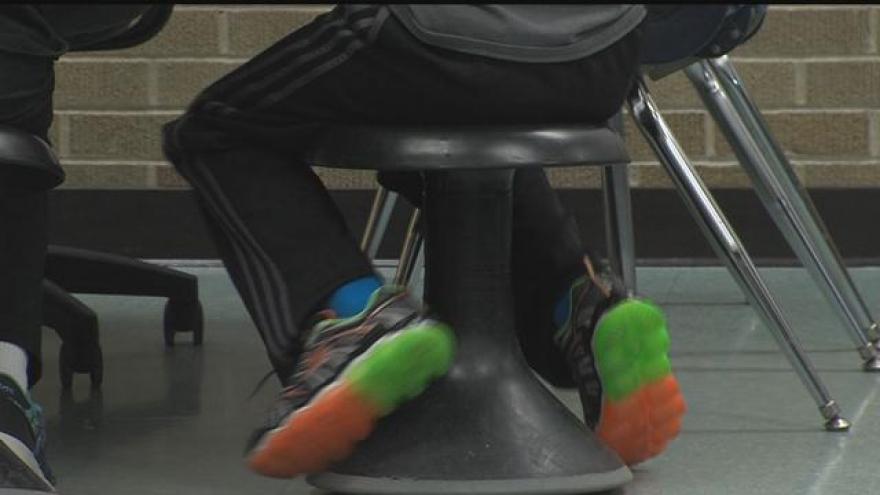 Third graders in the Mequon-Thiensville district have options when it comes to where they sit in the classroom.

“It just lets you have a little bit of fun while you're learning."

Luke Lalonde is talking about the new standing desk and wobble stools in his classroom at Wilson Elementary School.

“The whole point of it is so you can move your body while you’re learning.”

In 2016, teachers introduced new, alternative seating options in their classrooms. Now, all third grade students have access to wobble stools and a standing desk.

Initially, Breuer was concerned some students might get distracted.

“I thought maybe kids would fall over, just spin on them too much. I have not had anyone fall over or use them dangerously, so it’s worked out really well.”

For those students who do get off task, Breuer says all it takes is a reminder, but those situations are rare.

“The kids really have rose [sic] to the occasion. They really like them and use them properly and they have not become a distraction.”

Dr. Roxanne Kane, a pediatrician at Children’s Hospital of Wisconsin, says kids in general have become less active in sports. And with less time for recess, she says incorporating movement during the day is important.

"Encouraging kids at younger ages to develop those habits early can only be good."

In addition to wobble stools and standing desks, there’s also a basket of fidget toys that students can use, something Nyla Steltz enjoys.

“I squeeze it because sometimes in math I can’t really focus that good,” said the 3rd grader.

She says the stress balls help her stay on task. And her teacher has noticed. Breuer says she can tell the tools are working by class participation. Instead of fidgeting, they’re listening.

The alternative seating doesn’t come cheap. Wobble stools cost $75 a piece and standing desks are $235, but it won’t cost taxpayers any extra. Third grade teachers were able to get funding through the school’s PTO.

This also isn’t the first time the district has tried alternative seating. Principal, Jocelyn Sulsberger says they tried using yoga balls about six years ago. Those didn’t work out because of cost, liability and storage, but they started the conversation of alternative seating.

“All children are different, and there’s a continuum for their learning styles. I think it’s good to have options for classrooms.”

Currently, 4-K students through third graders have some type of alternative seating in their classrooms. Sulsberger says she isn’t sure if it’s something they’ll implement school-wide.

“I think the more options we have for kids, the better, so they’re able to really find the thing that’s best for them and helps them to tune into their learning.”

Although students like Luke think they’re a great idea for students of all ages.

“[It’s] surprising they don’t have it back in the other grades, which I think they should add them.”

Only time will tell. For now, third graders will wobble their way toward summer vacation.