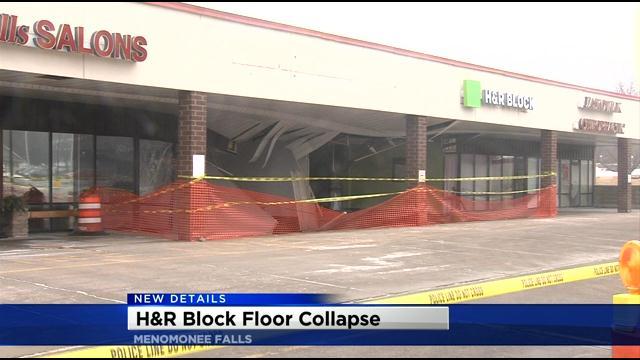 A local strip mall is shut down following a floor collapse that's left a gaping hole inside an H&R Block office.

Thankfully, no one was inside.

CBS 58's John Cuoco has learned that a crack was first detected in the concrete on Saturday and that H & R Block workers were moved to a new location about a block away.

The crack then started to bow and then the concrete gave way late Monday.

For safety reasons, fire and police officials shut off the utilities and advised the property owner to close all of the businesses in the strip mall. The area is blocked off with tape to keep people from getting too close to the damage because it's extensive.

From the front of the building, you can see the glass store front is gone and parts of the ceiling are hanging. But looking from the side of the building, the destruction is even more visible. The entire floor has fallen to the parking garage below.

\"This one was a shock to me,\" said Jeff Staffaroni, owner of 911 Board-Up, Inc. \"I've never seen a sinkhole inside of a building. I've seen them outside. I've seen outside walls collapse. To see this was a first for me.\"

Engineers are working with the property owner to determine if the building is structurally sound. The cause of the partial collapse is unknown at this time.