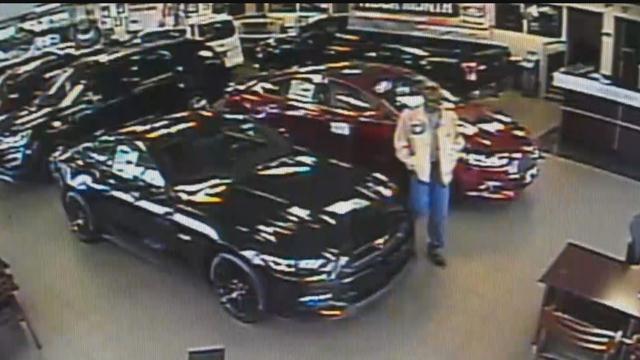 CBS 58—Two men are in custody in connection with car thefts from a Mount Pleasant dealership.

According to the criminal complaint, three Ford Explorers, a Ford Edge, a Ford Mustang and a Ford F150, all 2016 models, were stolen from Porcaro Ford with in the last two months.

“You don’t get a lot of sleep,” said Anthony Porcaro, the vice president of the dealership.

When Porcaro discovered brand new cars missing from his lot, he immediately went to his surveillance cameras and found a suspect driving away in a brand new Mustang.

According to the criminal complaint, the suspect on the surveillance tape is Israel Staley.  The complaint states, “Staley was viewed stealing key fobs from Porcaro and later returning after the dealership was closed to steal vehicles of the sales lot.”

On June 4, police pulled over Staley and LeVar Outlaw. The two were in a truck stolen from a dealership in Indiana. Porcaro called the dealer’s owner.

According the criminal complaint, “A patdown of Outlaw yielded a new Ford fob…A search of the vehicle yielded two additional fobs stolen from Porcaro Ford.”
The Criminal complaint also states, "Outlaw allowed law enforcement to search his phone, which resulted in the discovery of text messages between Outlaw and Staley referencing 'orders' being placed for the stolen vehicles."

Porcaro says he is meeting with his staff to review all policies and procedures.

“There could be some minor inconveniences for customers,” Porcaro said. “You know we might have to go through two forms of ID.”

And he says the scariest part about all of this is you never know how reckless these thieves will be on the road.

“The thing we have to remember is when people steal something and they’re about to get caught, they have nothing to lose,” Porcaro said.