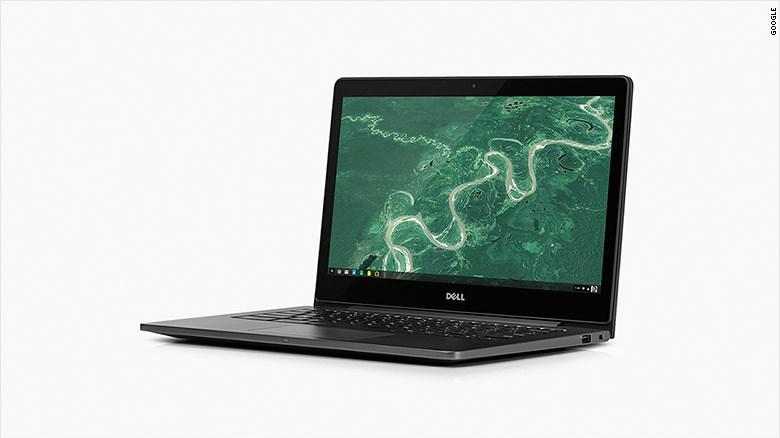 SAN FRANCISCO (CNNMoney) -- Google is putting Microsoft firmly in its crosshairs by releasing a new Chromebook that's super-powered for the workplace.

The new Chromebook 13, made by Dell, is a worker's dream: 12-hour battery life, a zippy Core i5 Intel processor and six-second boot time.

It's also rainbows and sunshine for IT departments: It's virtually impervious to malware, it takes 69% less labor to install, and they practically never need IT support.

Since Chromebooks are essentially Web browsers with a screen and a keyboard, they haven't been able to run some corporate software built by big companies. But recently, many of those corporate apps have been shifting to the cloud, allowing employees to run them on the Web -- which means Chromebooks are increasingly work-friendly

Still, Google wanted to push Chromebooks into the workplace even harder. In an attempt to get even a tiny slice of the Microsoft-dominated corporate PC market, Google made several improvements to the ChromeOS operating system that Chromebooks run, making ChromeOS readier to get to work.

Chromebooks can now VPN into corporate networks and even run apps that require Windows or Macs. IT guys and gals can manage a huge fleet of these things (tens of thousands) with simple software. And Chromebooks can store files to a hard drive more easily than before.

Google has already signed up Starbucks and Netflix as early customers. The two companies are currently using Chromebooks for Work in select departments. Starbucks will likely try them out in retail locations, according to Google.

Google first introduced the Chromebook in 2011. It was seen as quirky at the time, but they found a niche, particularly in K-12 school systems.

Chromebooks are among the fastest-growing segments of the laptop market, with sales soaring 38% in the second quarter of 2015, according to NPD. Windows laptop sales grew by just 6%.