Meet Bretagne, one of the last 9/11 Ground Zero search dogs 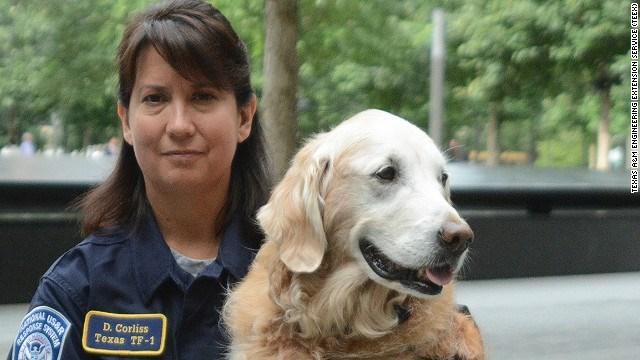 That's what the Texas A&M Engineering Extension Service calls its 52-acre search and rescue training center in College Station, Texas. Disaster City is a classroom for chaos -- a manufactured jungle of concrete, rebar and other rubble you might find in the aftermath of a hurricane or explosion or the 9/11 attacks.

\"It's like a playground for first responders,\" says Corliss, a member of the Texas Task Force 1 urban search and rescue team. \"It's like my second home.\"

Search and rescue teams travel to the facility from around the nation to receive training certified by the Federal Emergency Management Administration. Most of the trainees are human. Some are dogs. Hundreds of FEMA canine teams have trained at Disaster City.

For 15 years, Corliss has spent two weekends a month at the center working with dogs. That includes her golden retriever, Bretagne, one of the last surviving 9/11 search and rescue dogs.

Dogs and their handlers climb up and down the piles of concrete, hiding objects for canines to find. Trainers teach and test the dogs to hone their smelling and searching skills by sending them down into simulated tornado shelters and up into second story buildings.

Back in 2001, Corliss and Bretagne (pronounced, \"Britney\") were fresh graduates of Disaster City when they were deployed to New York shortly after the World Trade Center attacks.

Corliss joined hundreds of other search and rescue teams sent from around the world to find survivors at ground zero, working 12 hours a day for two weeks straight.

We know now there were very few survivors found in the rubble of the twin towers, and Bretagne, like so many other searchers, worked hard -- only to find none.

But Corliss discovered something unexpected: rescuers and firefighters would approach Bretagne and pet her. Soon they'd be sharing their personal stories with Corliss, describing the missing friends, loved ones and colleagues they were searching for. Bretagne had become a kind of therapy dog. \"Dogs can be so comforting, so it makes sense to me now,\" she says. \"I just didn't anticipate that, then.\"

9/11 was only the first of many national disasters that called Bretagne and Corliss into action.

Deployments followed for Hurricanes Katrina, Rita and other storms. Once Corliss watched Bretagne risk her own safety when the dog found herself standing on the end of a dangling staircase.

\"She walked to the edge of it and she stopped -- turned -- and she came back down,\" Corliss recalls. \"She did exactly what she was supposed to do, but it scared me a bit.\"

Despite all that training, Corliss admits \"there were still times when I held my breath and said, 'I hope she does this right. I hope she's OK.' \"

It's no coincidence that search and rescue dogs such as Bretagne succeed while working under such dangerous conditions.

From the time they're puppies, dogs must survive a rigid screening process before they can do this kind of work.

When Corliss spotted Bretagne, she had a feeling this dog might be right. The puppy was pushy.

Sharing a plastic kennel with eight other puppies, Bretagne buffaloed her way through the pack from back to front, to greet Corliss.

\"That kind of pushy behavior helped her be the persistent don't-give-up-style of working dog that I needed later,\" says Corliss.

A few other qualities Corliss says are key to good search and rescue dogs:

-- High toy drive: \"Their toy is their paycheck. We're looking for the dog that's going to be so over-the-top crazy for their toy that they're going to be happy going over this rubble pile.\"

-- High prey drive: \"They've got to be persistent. They're going to hunt for survivors, and continue to hunt, and not give up.\"

-- Nerve strength: \"We need dogs that are not going to be scared to climb a ladder up to the second story of a building -- alone without a handler — or to go down into a dark tunnel.\"

-- Focus: \"The dog can't be concerned about a nearby jackhammer or loud truck or crane or emergency sirens.\"

Bretagne left Texas Task Force 1 in 2009 to focus on her work as a local fire department search and rescue dog. Then after a couple more years, it was time for her to retire altogether. But that didn't mean the end of Bretagne's public service.

Now 15, Bretagne spends time once a week teaching kids how to read. Really.

She visits elementary school classrooms, where children, who \"may be intimidated or uncomfortable reading out loud to their classmates, have an opportunity to develop reading skills by reading to her,\" Corliss says.

Corliss has raised and trained two other golden retriever search and rescue dogs: Aid'N, now 10 and retired, and Taser, age 3.

Taser will continue the legacy that Aid'N and Bretagne have carried, dedicating their lives to helping people survive calamity.

Flying drones and other robotic technology provide new options for search and rescue teams, but Corliss says dogs will always be a part of the toolbox, along with cameras and listening devices.

\"I don't think there will ever be a substitute for their agility and sense of smell,\" she says. \"In that way, they're better than any other tool that we have out there.\"