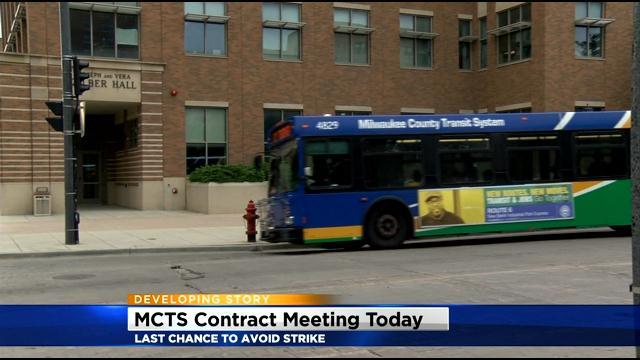 MCTS bus drivers are now planning to walk off the job Wednesday morning after voting down the county's contract proposal on Monday night. The union president says 93% of workers rejected a new contract, setting up a potential strike that would take effect at approximately 3 a.m. Wednesday morning. Both sides have one more meeting scheduled for Tuesday to see if they can come up with a last minute deal.

The county says the latest contract increases pay for bus drivers and mechanics, along with flex spending money to help offset increases in healthcare costs. The union president tells CBS 58 it's not all about pay, but also working conditions like longer bathroom breaks. Last week, about 92% of workers voted to authorize a potential strike.

\"It's not a fair contract,\" Union leader James Macon said.  \"It's telling you that we are coming hard at you.  This is what we have in our hand, proving hardcore negotiations. It's not lenient, it's not compromised, it's hardcore. You want to sit there and keep telling the public it's a fair contract, why did you put down there hardcore if it was a fair contract.\"

\"There's a lot of overtime in the system,\" Conway said.  \"That's not going to go away. If we can lower that overtime by bring in part-time drivers that would be a big help, it would help relieve some of the burden on the drivers who have to work a lot of hours. It would also allow us some fiscal flexibility.\"

A strike could leave tens of thousands of people without a way to get to work, run errands and go to Summerfest.
Macon says he has the paperwork to show the county and Milwaukee transport services could bring more to the table when it comes to negotiations and he says if they don't budge in a meeting Tuesday, a strike will happen, starting at 3 AM Wednesday.

Macon says they're doing that to make sure all riders get home safely and aren't stranded.

\"The county and the company better come with facts, 'cause right now, they're Disney Channel, no offense to Disney Channel, I love Disney, but the fact is, this is what they negotiated,\" said Macon.

Macon says ultimately the union doesn't believe in having a part time force with no benefits.

He says they don't want to go on strike but again, will do so if necessary.
Share this article: