MCTS and Metro LA in Twitter fight over NLCS 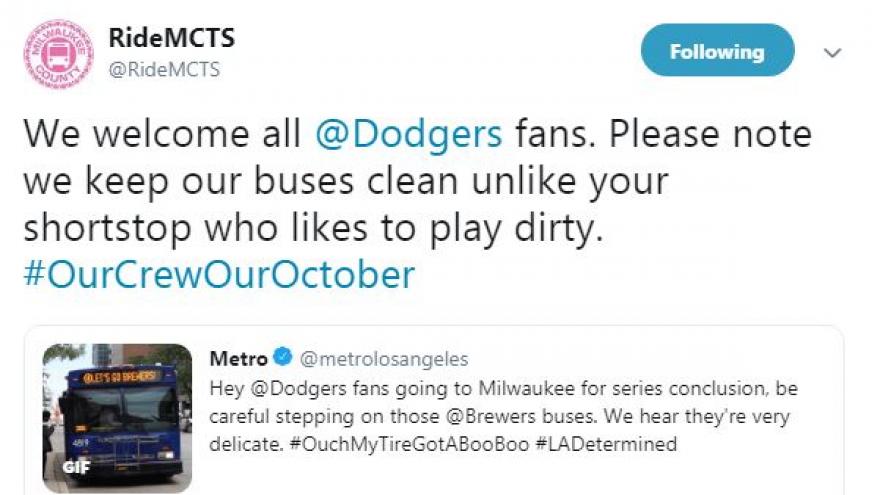 MILWAUKEE (CBS 58) -- The public bus service in Los Angeles, tweeted a warning to Los Angelenos traveling to Milwaukee for NLCS Game 6 and possible 7 saying the MCTS buses are "very delicate." The tweet included a GIF of MCTS buses with the signs "Let's Go Brewers!"

Although the intent behind the Metro Los Angeles tweet seems weak, the Brewers tweeted back and the fight is on.

MCTS responded and said that Dodgers fans are welcome on their buses which they keep clean "unlike your shortstop who likes to play dirty."

The tweet is in reference to the Dodgers Manny Machado who was fined a reported $10,000 for kicking Brewers first basemen Jesus Aguilar in the 13-inning NLCS Game 4.

We welcome all @Dodgers fans. Please note we keep our buses clean unlike your shortstop who likes to play dirty.#OurCrewOurOctober https://t.co/8nCeo4eUZV

A Brewers fan who tweeted at Metro LA about the twitter fight got a response saying that the playoffs may be a "new experience for many Brewers fans."

Hi, we enjoy a little good natured ribbing during the playoffs…we understand this is a new experience for many Brewers fans. :)