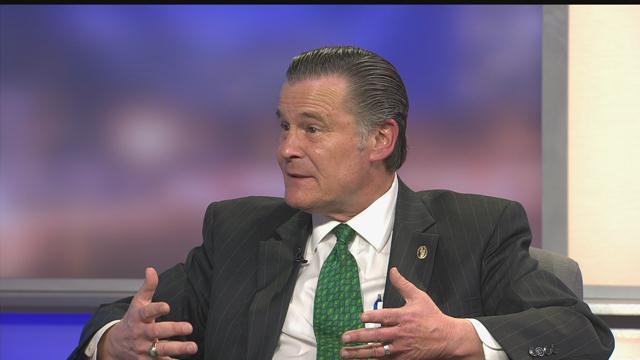 Milwaukee Alderman and candidate for mayor Bob Donovan joined us live on the CBS 58 News at 4 on Thursday, just days ahead of the April 5 election.

Ald. Donovan is a well-known opponent of the Milwaukee streetcar project, and has repeatedly said he'll stop the project if elected. He says despite their popularity in cities like Portland, a streetcar is too costly, and wrong for Milwaukee. "In most cities across America, they have been forced to inflate ridership numbers by giving away free rides," Donovan said.

An exchange at the most recent mayoral debate touched off controversy. Incumbent mayor Tom Barrett recalled a news release written by Donovan in 2011 to suggest his challenger was racially insensitive, a claim Donovan vehemently denies. In the release, Donovan criticizes "a deteriorating African-American culture in our city."

"I meant in my remarks a sub-culture within the African-American community that we do need to desperately talk about," Donovan said, "Why is it that 85-percent or more of the victims of violent crime in Milwaukee are African-American? We need to confront these issues head-on and seek solutions."

The focus of Donovan's 20-month campaign has been to restore public safety. Citing rising homicides and car thefts, Donovan wants 200 more officers on Milwaukee streets, and wants them walking a beat so they can stay in touch with their respective neighborhoods. While the city of Milwaukee has added officers in recent years, Donovan says those additions "are not keeping pace with the retirements and the officers that are leaving."