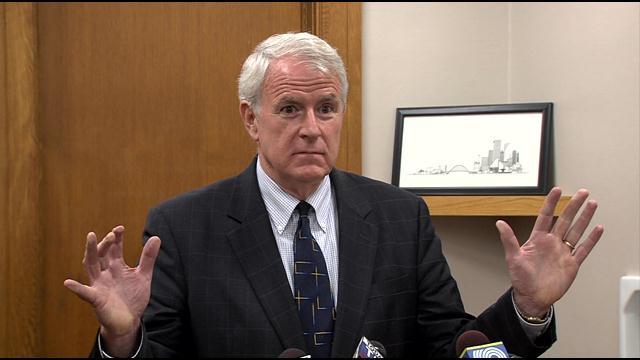 On Sunday afternoon a little boy was struck and killed after wandering away from a birthday party and into the street near 48th and Hampton.

The mayor says the driver stopped and was shot and killed by somebody at the party. The brother of the little boy who was struck was also killed by the gunfire. He was just 15 years old.

\"Three deaths. Three deaths!\" lamented the mayor. \"It started out as a tragedy, an accident. But the total loss of control, the total inability to control oneself in that setting lead to two more tragic deaths.\"

While the mayor praised the Milwaukee Police Department for the seizure of more than 600 guns so far this year, he acknowledged Milwaukee is facing challenges like many other cities.

\"I'm talking about this because black lives matter. These lives matter. And there's been a lot of talk locally and nationally and there should be about community relations and police departments.\"

Milwaukee homicides are up by %160 this year at 39. More than 30 of the victims were African American.

\"Somebody has to step forward and say black lives matter when you're talking about 31 or 32 victims in four months.\"

The other shooting the Mayor referenced happened a short time after the 48th and Hampton incident.

Police say a man, 22, was shot and killed along Swan just north of Brown Deer Road in Milwaukee around 7:30 p.m. Sunday.

A suspect is in custody. Sources say he is a 45 year old man who knew the victim.

Mayor Barrett also said that in 80% of homicide investigations in Milwaukee, both victims and defendants have had prior contact with police.