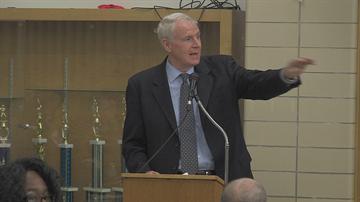 \"This is Ground Zero,\" Butler said.  \"You bring together, almost what is like a  perfect storm for this to be the expression of people's hopelessness and despair.\"

That's why he was proud to support Mayor Tom Barrett's call Tuesday for church leaders to help promote the 'Ceasefire Sabbath', which is slated to start next month.

\"Churches, civic organizations, community institutions, we all have to say at some point, 'No more of this,'\" Butler said.

The week of May 12 will mark the 10th year of the event that will include activities, forums and, this year, a gun buyback program at Butler's church -- paid for by private businesses.

\"If we can have ten fewer shootings as a result of this, that's a huge win,\" Mayor Tom Barrett said.

\"Nobody, including the faith community, thinks the gun buyback program solves the problem,\" Flynn said.  \"What it does do is draw attention to the problem.\"

While the city pushes this annual call for peace, skeptics say it's time for a new approach.

One proposal by Donovan calls for more cops on the streets and selling city parking structures to pay for them.

\"We, as city officials I believe, need to offer a little more to our beleaguered residents than prayer services and marches,\" Donovan said.

\"There are a lot of easy answers out there and they're all wrong,\" Flynn said.  \"The answers are hard and they're long-term.\"

For the short term, community leaders are pleased with the smalls steps.

\"If we get two or three dangerous criminals to turn in their guns, I'm happy about that,\" Barrett said.