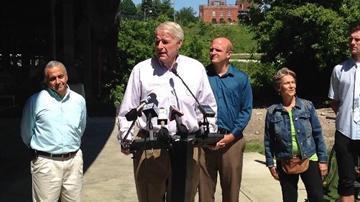 MILWAUKEE -- It didn't take long for Milwaukee Mayor Tom Barrett to sign the sex offender ordinance. It passed the Common Council one week ago and he signed it Monday.

The Mayor hinted last week that signing this would put pressure on the state of Wisconsin to step up. He thinks the system is flawed in how sex offenders are placed after they're released from custody.

Right now most Milwaukee County sex offenders are dumped into the city because other cities have sex offender ordinances in place.  Milwaukee didn't.  Mayor Barrett and other city leaders like Alderman Tony Zielinski think this is unfair.

They wants some sort of statewide approach to sex offender placement.  There's already been some response.  State Representative Joel Kleefisch released a statement saying the state has been working on this for years -- only to be stonewalled by Milwaukee lawmakers.  He goes on to say state law needs to make placement equal across municipalities.

The four Milwaukee County municipalities who have no residency restrictions for sex offenders are Hales Corners, River Hills, Shorewood and Whitefish Bay.