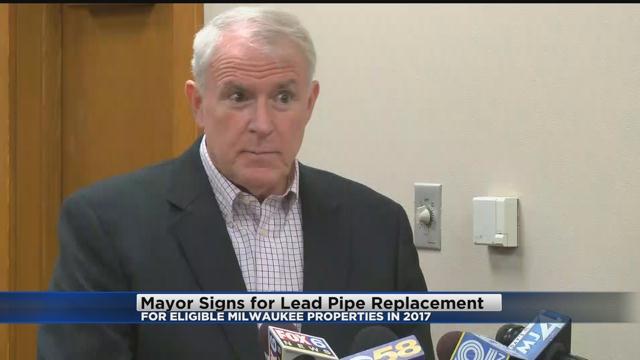 The city of Milwaukee has a new long-term plan when it comes to getting rid of lead.

Mayor Tom Barrett signed the far-reaching ordinance Tuesday morning at city hall. A part of the plan forces homeowners to replace their private lead water service lines if the city is replacing the connected public lines.

City officials say the plan will be expensive but worth it to get rid of that health risk.

"Because what we believe very strongly based on engineering analyses is that if you do just the public service, the public lateral, and not the private lateral, that's probably worse than doing nothing," Mayor Barrett said.

"We looked to one other community in the country that is an example and that is Madison," Alderman Jim Bohl, Chairperson of the Milwaukee Water Quality Task Force, said.

"Madison has undertaken this work and has, for the most part, completed it. Madison provided a subsidy where they picked up on a cost-sharing basis on the private side. and Madison's subsidy was 50%," Bohl said.

In Milwaukee, the city's subsidy will be 66% subsidy for private replacements. Costs for the homeowner will be capped at $1,600.

That can be paid over a ten year period with payments around $13 a month, Barrett said.

"First of all, this is going to be mandatory. And we want it to be mandatory because unfortunately we have some landlords, some absentee landlords in particular, who would not have this as a high priority," Barrett said.

Children's health is on of the main motivating factors here and Mayor Barrett said that starting next year the city will replace lead service lines to all 400+ state licensed daycare in the city.