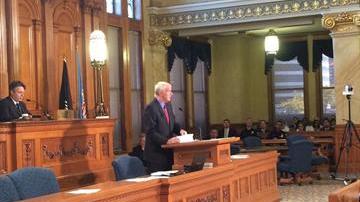 MILWAUKEE -- Making sure Milwaukee streets are safe and well maintained are two of the goals of a new budget plan unveiled Tuesday by Mayor Tom Barrett.

The Mayor outlined his 2015 budget before the Milwaukee Common Council Tuesday morning.  He wants to expand his transitional jobs program.  He highlighted two workers from the program this summer.  It's a partnership with city departments to hire people for a short period of time to learn specific skills.

The mayor also showed his support for the high-impact paving program.  It's the program that quickly repaved Brady Street, parts of Prospect Avenue and other roads in the city.

He also touted the addition of police officers.  There are about 85 new officers - with a net gain of about 12 officers. The additional officers brings staff levels back to where they were in 2012. The mayor also said he's allocating $100,000  for police body cameras.

\"There are many issues related to the body cameras,\" Mayor Barrett said.  \"There is the cost of the camera themselves. Then there is the storage cost, which is something that has to be considered. Then there's some public policy issues involving issues like privacy. What do you do in a situation where police go to a home with a domestic violence situation or if they're dealing with a child.\"

The budget now goes to the common council. There will be a public hearing about it in October.