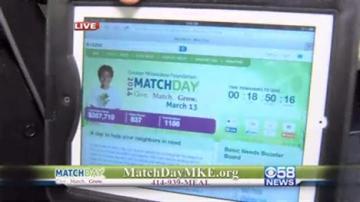 Hunger Task Force joined numerous charities from around our area for Match Day on Thursday, March 13.

It's the one day during the year where any donations get a proportional match from the Greater Milwaukee Foundation.

\"We've got 60 emergency food pantries, 20  soup kitchens and homeless shetlers that rely on us for a steady and consistent supply of free food,\" Tussler said.

The nearly 20 hour-operation relied on volunteers.  The Greenfield Fire Department sent a group - for the 4:00 am shift.

\"We thought this was a great way to give back to the community for some of the people we serve every day,\" assistant fire chief George Weber said.

That's exactly what match day does.  The Greater Milwaukee Foundation distributes from a pool of $750,000.  The money is given out on a percentage basis to whichever charity raises the most money.  Hunger Task Force took first this year.  They believe it's because their food stays local.