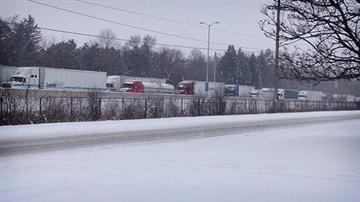 MENOMONEE FALLS - A massive pileup on Highway 41/45 near Leon involved dozens and dozens of vehicles. One of the victims says it started just before noon today when a vehicle in front began sliding and went out of control. That triggered the chain reaction accident. It's unclear how many people were injured. Nick Gardippe of Richfield was in the middle of the wreck. He says when it happened people had to make quick decisions about what to hit in front of them that would cause the least amount of damage. In his case, Gardipee says he had to avoid slamming into the back of a semi which he thought would have meant sure death. He only suffered a bloody nose and a cut lip from the air bag, but the front end of his vehicle was heavily damaged.  The southbound lanes of Highway 41/45 were closed for several hours as officials investigated and cleaned up the crash.