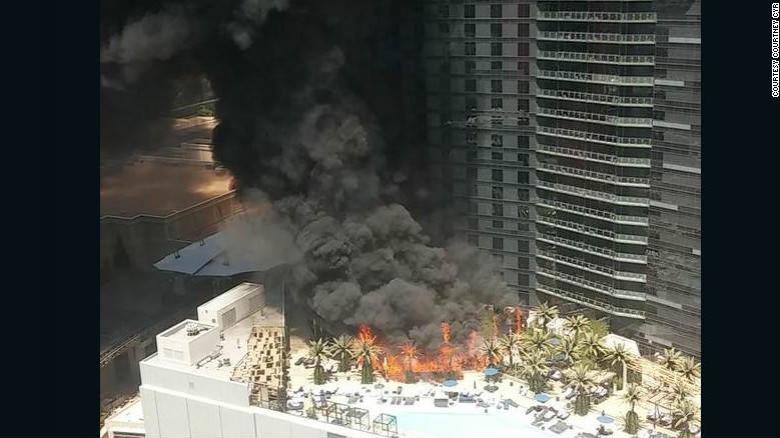 Videos posted on social media showed the inferno consuming the poolside tent-like cabanas, palm trees, and just about everything else on the open-air deck of the Cosmopolitan Hotel.. An unknown number of guests and employees at the 3,000-room resort were evacuated. There were no immediate reports of serious injuries, although two people were taken to a hospital for smoke inhalation treatment, according to the Clark County Fire Department.

Seidel said the fire was contained to the resort's west end tower.

Corbin Williams, a guest staying on the 14th floor, described a chaotic scene.

\"Alarms started going off and it became really chaotic.,\" Williams, from Los Angeles, told CNN, \"It's pretty crazy over here. There are fire trucks everywhere.\"

Matt Mills, who was sharing a suite with Williams, shot video through the door leading to the pool as the evacuation was underway.

\"This is unbelievable. Unbelievable,\" Mills is heard saying on the video.

Williams said his experience at the pool a day earlier left him with an unsettling premonition.

\"I noticed cigarette burn holes in my cabana's roof, I assumed they were from flicked from above balconies,\" he said. \"And I had that exact thought, that these things could catch on fire.\"

When asked if cigarettes may have been the culprit, Clark County Fire Department Spokeswoman Sandra Baker said \"early preliminary reports indicate a landscaping fire,\" but that investigators were still looking into the cause.

As for Williams, who said he was staying in a complimentary suite because of \"issues we had the last time we stayed (at the hotel),\" he remained upbeat.