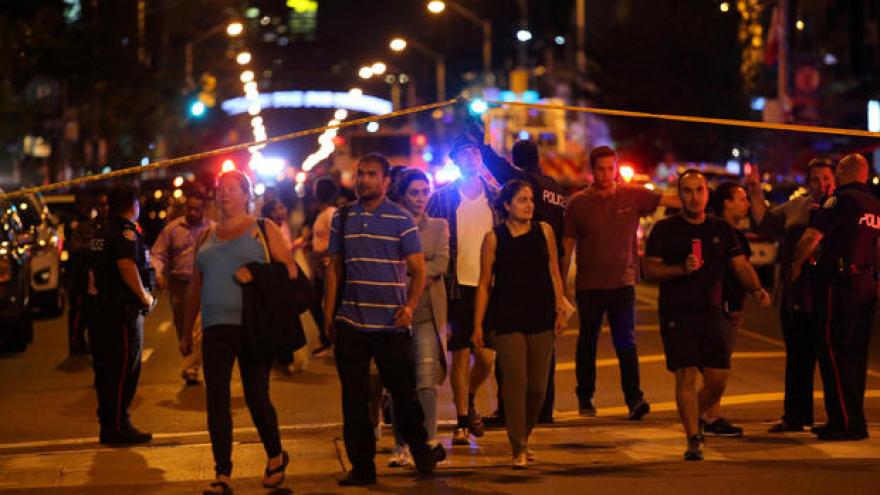 TORONTO -- (CBS NEWS) A man walked along a Toronto street firing a handgun into restaurants and cafes, shooting 14 people and killing two before dying after an exchange of gunfire with police. Police Chief Mark Saunders did not rule out terrorism as a motive, though a law enforcement official told CBS News senior investigative producer Pat Milton there is no indication at this time that the shooting is terrorism-related. The investigation is fluid.

Officials did not immediately identify the attacker, other than to say he was 29 years old.

Toronto police spokesman Meaghan Gray said early Monday that a second victim had died, though there were no further details.

Saunders earlier said that a young woman had died in Sunday's shootings and that a girl aged 8 or 9 was in critical condition. The condition of the other victims was not known yet, police spokesman Mark Pugash said. 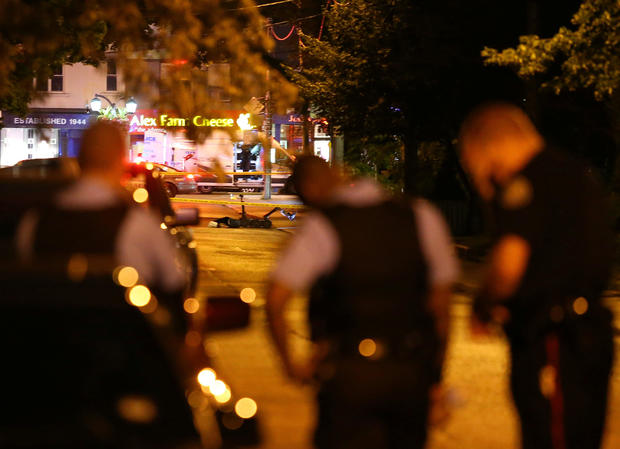 A video from one witness shows a man dressed in black clothes and a black hat walking quickly and firing three shots from the sidewalk into at least one shop or restaurant in Toronto's Greektown, a lively residential area with crowded Greek restaurants and cafes.

Police urged people to come forward with other video or witness testimony:

Witnesses heard many shots and described the suspect walking past restaurants and cafes and patios on both sides of the street and firing into them.

John Tulloch said he and his brother had just gotten out of their car when he heard about 20 to 30 gunshots.

"We just ran. We saw people starting to run so we just ran," he said.

Toronto Councillor Paula Fletcher told CP24 television that "it's not gang related. It looks like someone who is very disturbed."

My thoughts are with everyone affected by the terrible tragedy on the Danforth last night in Toronto, and may the injured make a full recovery. The people of Toronto are strong, resilient and brave - and we’ll be there to support you through this difficult time.

"We were so use to living in a city where these things didn't happen," Toronto Mayor John Tory said. "But there are things that happen nowadays and they are just unspeakable."

This past weekend Toronto police deployed dozens of additional officers to deal with a recent spike in gun violence in the city.

"Guns are too readily available to too many people," Tory said.

The mass shooting comes a few months after a driver of a van plowed into pedestrians on a Toronto sidewalk, killing 10 people and injuring 14. Authorities have not disclosed a motive. But they have said the arrested driver, Alek Minassian, posted a message on social media referencing a misogynistic online community before the attack.