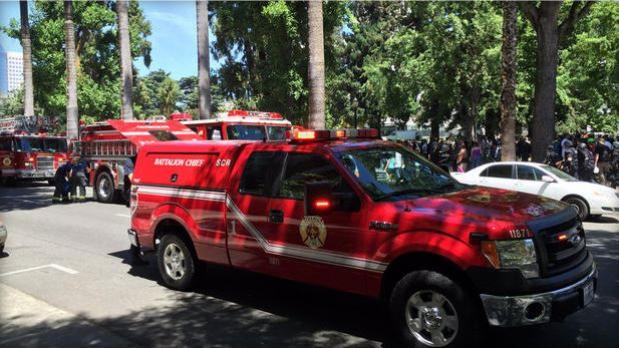 (CBSNews) SACRAMENTO - Officials said Sunday afternoon they are responding to a "mass casualty incident" at the state capital in California where a long-planned rally of numerous West Coast white supremacist groups.

The Sacramento Fire Department tweeted that at least 5 patients have been transported to the hospital with stab wounds so far.

Officer Matt McPhail with the Sacramento Police Department says none of the injuries are believed to be life-threatening.

The victims were all present while a protest took place, though McPhail said it was still unclear whether and how they were involved.

The Traditionalist Workers Party had scheduled and received a permit to protest at noon Sunday in front of the Capitol. McPhail says a group of counter-protesters showed up to demonstrate against them.

The Southern Poverty Law Center has described TWP as a group formed in 2015 as the political wing of the Traditionalist Youth Network, which aims to "indoctrinate high school and college students into white nationalism."

In a post on their website TWP described the gathering as their "Thermopylae," in reference to the infamous Greek battle site where a small Spartan force stood up to a massive Persian army.

They claimed the purpose of their gathering was a "protest against globalization and in defense of the right to free expression."

Anti-fascist groups have been preparing a counter-protest, which they say will aim to shut down the "Nazi mega-rally."

It is unclear how exactly the violence at the capital began.

A similar violent incident happened at a KKK rally near Los Angeles earlier this year, when Klan members were confronted by counter-protesters and mayhem ensued.

Witness video captured the brawl in an Anaheim park about 3 miles from Disneyland. Several protesters could be seen kicking a KKK member. One Klansman with an American flag used the pole's tip to stab a man.

Officers on scene said they witnessed a Klan member stab a protester with a knife. They found a third counter-protester in a car also stabbed.