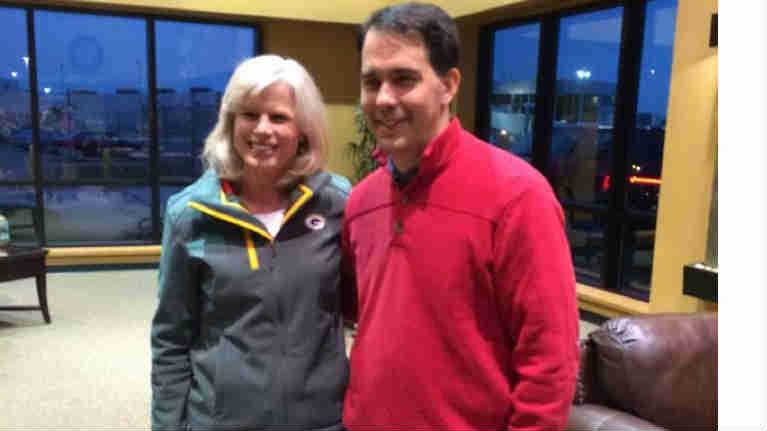 The photo op happened in Green Bay according to the Walker campaign that put the photo on twitter.

They captioned the photo \"What are the chances, part two.\"

An earlier photo entitled \"What are the chances, part one\" was when Burke's campaign bus pulled up in front of the Governor's.

Governor Walker made several stops Monday from Sun Prairie, to Onalaska, to Mosinee. He's expected to wrap things up with a rally in Waukesha late Monday night.

\"I want to tell you as long as I'm Governor of this state, as long as Rebecca Kleefisch is our Lieutenant Governor, every time we have a chance to stand with the hard-working taxpayers in the face of the challenges from the Washington based special interests,  we will stand with you,\" a fired up Walker declared. \"Tomorrow we're asking you to stand with us.\"

Burke was equally as busy and energetic with stops in Superior, Stevens Point, Eau Claire with a final event planned for Madison.

\"I set my alarm for 4:30 every morning,\" she told supporters. \"And I am up before the alarm even rings because I am fired up and ready to go. And all those attack ads and these lies and everything else - I'll tell you this - the tougher they get, the tougher I get.\"

The Government Accountability Board says more than 289,000 ballots have already been cast in Wisconsin during two weeks of early voting.

If you need to register at the polls, be sure to bring a utility bill or some other document that has your name and address.

You do not need a photo ID to vote.