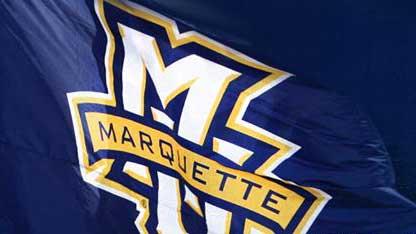 The Big East Conference home schedule for the Marquette University men’s basketball team was released on Tuesday. It includes five Saturday match ups at the BMO Harris Bradley Center.
Marquette Madness will take place October 9 at the Al McGuire Center.
The Golden Eagles will host their conference lid lifter on December 30 when the team welcomes Seton Hall to Milwaukee.  After a pair of road matchups, MU will return home on January 9 to face St. John’s to start a run of 5-of-7 games (includes January 27 game vs. Stetson) at the BMO Harris Bradley Center.  In the 10-team conference, each program plays the other nine teams in home-and-home series during the regular season.
The BIG EAST Conference Championship is slated for March 9-12 at Madison Square Garden in New York.
Marquette will play University of Wisconsin-Madison in Madison on December 12.