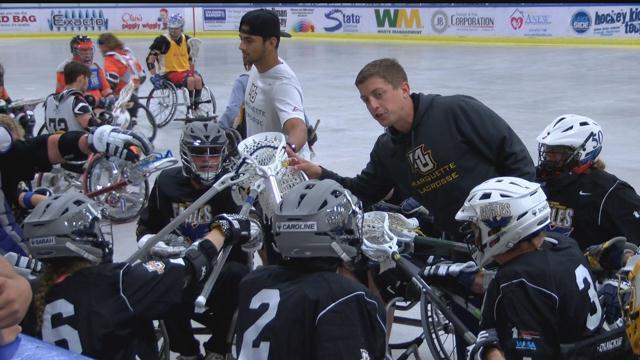 At the Midwest Wheelchair Lacrosse Championships, all of the players were in wheelchairs -- but they didn't all need to be.

The first-ever competition of its kind in the Midwest happened in Ozaukee County earlier this month. The wheelchair lacrosse teams are made up of both able-bodied athletes and disabled ones. Members of the Marquette University Men's Lacrosse Team alter their game to play in wheelchairs, so they can compete alongside the disabled athletes -- including 11 veterans getting treated at the Milwaukee VA.

"This has been life saving for many of the veterans who could’ve gone to a wrong pathway, a downward spiral," said Dr. Kenneth Lee, a surgeon at the VA who founded the adaptive lacrosse team. "But they’ve been rejuvenated to have life. It gets them back on their feet again, so to speak."

One of those veterans is Al Lewis, who lost his legs in Iraq.

"To be competitive again is - it's something that’s driven me since I was a kid - and to have to make changes and play adaptive sports now is something that’s given me an opportunity to maintain my competitive edge," Lewis said. "To have fun to make friends and overall just have a good time."

The partnership between Marquette University and the VA started over a year ago. Jason Pereles, the Director of Operations for Marquette Lacrosse, is the head coach of the Milwaukee Eagles adaptive team. He says working with disabled athletes, especially veterans, has given him a new perspective on coaching -- and on life.

"You don’t have to coach effort here," said Pereles. "These guys show up to practice, and they train harder than anybody I've ever seen. As a coach, when you don’t have to worry about coaching effort, it makes your job a lot easier."

In fact, Pereles says that effort is rubbing off on the college athletes he works with every day.

"They way they train, go about their business, they don’t let the small stuff bother them. It’s the right way to carry yourself," he said. "It's good for [the college players] to come out and see the way that somebody who wishes they could be in a different situation acts. It’s a chance for our guys to come out and say you know what, if they were having a bad day, in retrospect it's probably not that bad a day."

Lewis says he hopes that attitude sticks. If there's one thing he wants these players to learn, it's this -- when you fall down, you get back up again.

"In life you get hit with certain obstacles, but you can’t let it get you down, you just gotta keep going," he said. "You gotta make it through. When a door closes, another one opens. You just have to have a positive outlook on life, cause that’s all you have. This is the only life you have, you have to enjoy it."