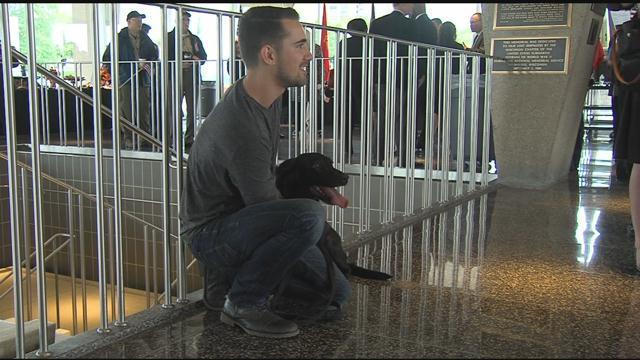 Early Friday morning, a hushed crowd gathered to hear a stirring national anthem sung by a UW Milwaukee student, the sounding of the bell and the laying of wreaths in a reflecting pool at the War Memorial.

It was difficult to recall terror attacks that  killed nearly three thousand innocent people and  the emergency responders who rushed towards certain death.  But It is also a time to remember how we reacted.

\"As citizens of the world we came together around a common purpose,\" declared MPS Superintendent , Dr. Darienne Driver. \"Our televisions and radio stations brought us stories of heroism, of courage and of bravery.\"

Not forgotten in this were  the thousands of men and women of U.S. military who were killed or permanently wounded, both physically and emotionally, in the subsequent war on terror.

\"I was in Wisconsin when it happened,\" recalled  Vice Admiral Dirk Debbink, U.S. Navy (Ret). \"Then I found myself in Washington D.C. for many years preparing our sailors to defend our country around the world.\"

We couldn't help but notice a young man with his dog. Turns out he is Marine Cody Crangle and a dog handler.

He told us how he was finally reunited with the dog Flo who served alongside him in Afghanistan.

\"We became pretty close,\" explained Crangle.  \"Eight months.  24 seven. You build a comradery with your fellow Marine. It's a bond that's hard to explain to someone who isn't there with you. We've become really close. Really, really close.\"

A symbol  of the enduring human connection that can happen. Even in the most dire of circumstances.