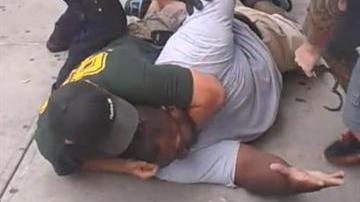 NEW YORK (CNN) -- A man who captured video of the fatal confrontation between New York police and Eric Garner was arrested Saturday night on gun possession charges at a Staten Island hotel, according to a law enforcement official.

Ramsey Orta, 22, was a friend of Garner, who died July 17 after a police officer used a chokehold while arresting Garner, who was accused of selling cigarettes illegally. Orta's cell phone video showed Garner -- an asthmatic -- on the ground screaming that he couldn't breathe.

Orta is being charged with criminal possession of an unloaded weapon because he did not have a permit to carry a concealed weapon, the source said.

Orta was arrested leaving the hotel after police said they saw him passing an object to his girlfriend, who placed it in her waistband, according to the source. Police stopped them both and recovered a gun from the girlfriend's waistband, the source said.

The girlfriend was also charged with possessing the gun, in addition to a marijuana charge, the official told CNN.

The gun, a .25 caliber Norton semiautomatic handgun, was reported stolen in Michigan in 2007, a second law enforcement official said.

Police were at the hotel because it's a known drug location, the source said.

The source said it was only after the arrest that police realized Orta filmed the deadly confrontation with Garner when he told police, \"You're only mad at me because I filmed your boy.\"

Officer Daniel Pantaleo, who is seen on the video choking Garner, was put on modified assignment and stripped of his badge and gun amid the investigation, the New York Police Department said. A second police officer was placed on desk duty. The chokehold tactic is prohibited by the NYPD.

Orta is awaiting arraignment and could not be reached.

The Staten Island district attorney's office said Orta's arraignment will happen Monday. The office declined to provide any further details on the arrest.