Man wakes up to smoke in apartment, minutes before fire overtakes his unit 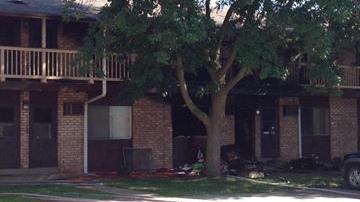 MILWAUKEE -- An apartment resident awakened by the smell of smoke followed by the blaring of a smoke alarm Wednesday morning.   Shane Hayward lives on the second floor apartment in the 600 block of S. Hawley Road, which is now destroyed from the fire.  He says he's lucky to be alive.

Hayward quickly realized something was burning somewhere, so he got out of his apartment.

\"It was all of five minutes,\" Hayward said.

Five minutes before his one-bedroom apartment was on fire.  Cell phone video shows the flames climbing into Hayward's apartment from the floor below.

\"I saw it take over the wall and then all of a sudden they were shooting out the window.\"

People scrambled to get out of the apartments.  Hayward tried to wake up other people.

MFD arrived quickly to help get people out.

\"There was an elderly woman with her walker and even though we're concerned about the fire we had to evacuate her first because that's a life safety issue,\" Kaiser said.

There were smoke detectors in other apartment units, but MFD isn't sure about the first unit.

\"It was unoccupied when we arrived,\" Kaiser said.  \"Sometimes the smoke detectors can fail to work with a lot of heat and fire.\"

Now Hayward has to figure out where to go and what to do next.

\"I think I lost everything.\"

The Red Cross is assisting about six people who can't go back to their apartments.