Man Stabbed to Death Saturday was Father of 7 Children 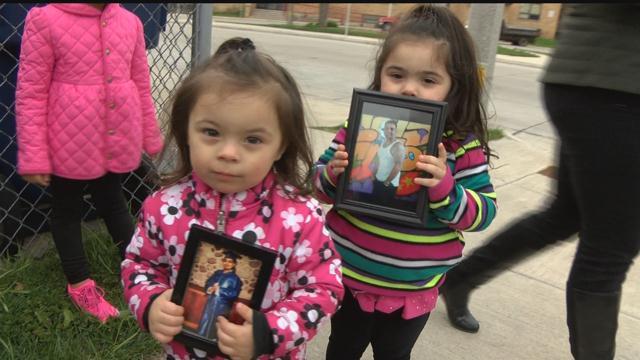 A Milwaukee man who was stabbed to death this weekend during a 10-person brawl leaves behind an extended family and seven children wanting answers on the death.

Sunday evening more than 70 people joined together for a vigil honoring 39-year-old Anthony Garcia. They met a block away from where the stabbing happened - near the intersection of South Muskego Avenue and West Bow Street.

The family lit candles around a make-shift memorial with photos. Two of Garcia's toddler-aged daughters - Mariah and Julianna - held balloons along with picture of their father.

Analisa, Garcia's youngest daughter, turns one-year-old in the coming week. Her mother held her in the light rain of the evening.

Garcia oldest daughter - 22-year-old Maricela - still is processing that her father is gone.

"I know he was everything to my brothers and they're very young. 10 and 11 and he was their hero - everything in the world to them," Maricela Garcia said.

Relatives describe the death as brutal.

At 1:30 a.m. on Saturday morning a fight in the streets led to the fatal injury, according to a Milwaukee Police Department press release.

"I think this was a random thing. It started off as a fight and then from what we're hearing and from what people are saying is that he got jumped," Johnny Garcia, Anthony's brother, said.

"They say in the chest, in the upper area, he was stabbed. They say one of the wounds was through his heart so he passed away pretty fast. So they said for any comfort he didn't suffer much," Johnny Garcia said.

Milwaukee police are still investigating. They have reported no arrests in this case at this time.

The family has started a Gofundme page to pay for funeral expenses.