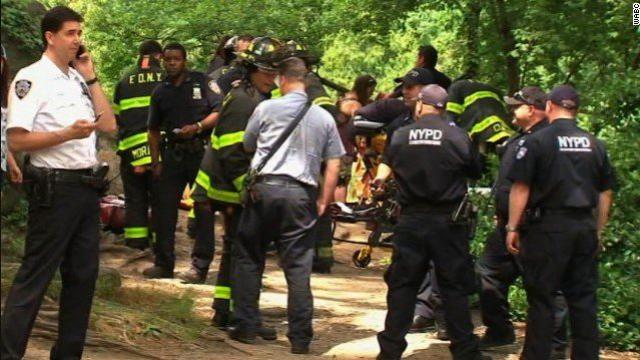 (CNN) Members of the New York Police Department bomb squad are investigating the cause of an explosion in Central Park on Sunday that nearly blew a man's leg off, police said.

"We do not have any evidence of a constructed device or commercial-grade fireworks," he said. "There are no specific or credible threats directed at New York for July Fourth."

The victim, an 18-year-old tourist from northern Virginia, and two friends jumped off a rock in the park shortly before 11 a.m., O'Connell said. As they did, an explosion occurred, injuring one of them.

The victim was transported to Bellevue Hospital in serious but stable condition for surgery. The victim and his two friends are not considered suspects, O'Connell said.

Forensic evidence indicates the explosive was not meant to go off from someone stepping on it, suggesting the work of an amateur hobbyist, said NYPD bomb squad commanding officer Mark Torre.

Witnesses said the sound of the blast rippled through the park like a "cannon," sending birds flying off trees.

Explosive material from the scene is being tested at a bomb lab, a federal law enforcement official told CNN. Members of the FBI-led Joint Terrorism Task Force with expertise in explosives are assisting given the nature of incident, the official said.