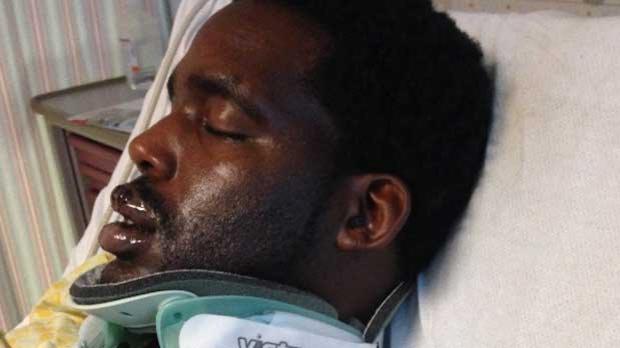 (CBS NEWS) A man is hospitalized in Colorado Springs with serious injuries after an electronic cigarette exploded in his face, his family says.

29-year-old Cordero Caples suffered a broken neck, facial fractures, burns to his mouth and shattered teeth in the explosion. According to an account posted by his sister on the fundraising site GoFundMe, Caples was using an e-cigarette made by Kangertech when it exploded on Friday. Kangertech has not yet responded to a request for comment by CBS News.

Caples' sister, Colessia Porter, described the situation as "heartbreaking." "Any sudden move can cause him to be in a paralyzed state, and that is something we don't want," Porter told WMC-TV in Caples' hometown of Memphis. "He's going to need 24-hour care for a while and constant monitoring from family and friends and loved ones." She said he underwent spinal surgery on Sunday, the first of a number of operations he's expected to require.

According to the Colorado Springs Fire Department, emergency crews responded to the medical call at his job, and the incident is still under investigation, the station reported.

Although safety officials say fires or explosions caused by e-cigarettes are rare, the Federal Emergency Management Agency (FEMA) said it was aware of at least 25 such incidents between 2009 and 2014. Nine people were injured, including two who suffered serious burns.

"The shape and construction of e-cigarettes can make them more likely than other products with lithium-ion batteries to behave like 'flaming rockets' when a battery fails," FEMA warned in a 2014 report.

"It exploded in my face," Garza told the station. "I never thought something like this could happen."

Last week, he joined two other California men in a lawsuit against companies that manufacture and sell the products.

"It's unconscionable that these products are out there, and they are randomly exploding all across the country," said Garza's attorney, Greg Bentley.

Bentley and his firm also represent former LA Galaxy soccer player Danny Califf, who was hurt in February when an e-cigarette exploded next to his face, and Greg Phillips of Bakersfield, who suffered leg burns when an e-cigarette battery exploded in his pocket in September.

"This is an unregulated industry, that is causing tremendous harm across the country," Bentley added.

In October, federal transportation officials imposed a new rule banning e-cigarettes from checked baggage on airlines to protect against the risk of in-flight fires.